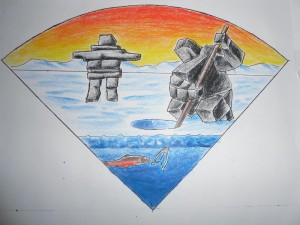 As part of the community engagement strategy for the Project, a logo contest was initiated in each of the four regions.  The logo will be based on a circular medicine wheel, with each of the four partner regions being represented in one quarter of the logo.  Submissions from Repulse Bay residents, Calvin Smith and Ron Ullikatar Qamaniq, were selected.

Calvin Smith teaches in Repulse Bay, Nunavut.  His students have created a variety of relief prints related to Inuit culture. The type of art he produces ranges from murals to a 20 foot flag made from pop cans.  He was also set designer for six musicals performed at the Arts and Culture Centre in Grand Falls-Windsor, Newfoundland & Labrador.  His speciality is oil painting on canvas and he has developed a style he calls “Harmony in Space”.  The subject matter in many of his paintings is the environment quite often relating to the fishery.

Ron Ullikatar Qamaniq was born in Iqaluit, grew up in Arctic Bay and now lives in Repulse Bay.  Ron’s logo is made up of three images:  fish to show the reason, anchor to show the fisheries and the Inuit Mermaid (Sedna) to show Nunavut. 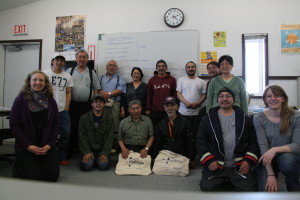 Eleven residents of Repulse Bay recently completed the two week course ‘Working in Research: A Community Guide to Understanding and Participating in Research Programs’. This Nunavut Arctic College course delivery was funded by a contribution from a research project grant from the Social Sciences and Humanities Research Council of Canada (SSHRC) and was supported by the Government of Nunavut, Department of Environment, Fisheries Division with in-kind support from Arctic College.