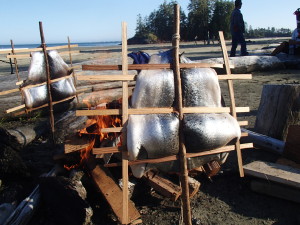 Tla-o-qui-aht are a fishing and hunting people, that have strong connections to the lands, resources, songs, masks, etc in their Ha-houthlee (chiefly territories). In recent history, the Tla-o-qui-aht Nations have engaged in various economic development projects within fishing, eco-tourism, and hospitality which have provided employment and revenue to the Nation and its muschim (people of the Nation).

The Tla-o-qui-aht hereditary system is a complex form of self-government that integrated a distinct worldview characterized by a deep understanding of history, family and the connection to the ha-houthlee and the resources within.

Tla-o-qui-aht is a thriving community that relies on the marine resources for not only food and ceremonial purposes, but as a keystone to their economy. Tla-o-qui-aht was one of five Nations who were plaintiffs in the successful Ahousaht et al. (2009) legal case against the Government of Canada. Through this legal challenge, the five Nations proved an aboriginal right to fish and sell all species of fish within their ha-houthlee. This implementation of this right is currently being negotiated with the Government of Canada. The Tla-o-qui-aht Fisheries department and Tla-o-qui-aht governing structures are currently implementing best practice models in resource management that is based on our traditional values, teachings and modern science.