Elizabeth May Chair in Sustainability and Environmental Health Faculty of Science

Dal.ca Home
Faculty of Science
Home
Elizabeth May Chair in Sustainability and Environmental Health
About
Elizabeth May 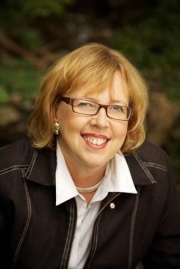 Elizabeth May is the Leader of the Green Party of Canada and one of our country’s most respected environmentalists. She is a prominent lawyer, an author, an Officer of the Order of Canada, and a loving mother and grandmother.

Elizabeth was an active community organizer from a young age, as a teenager in Nova Scotia, she led a campaign to prevent herbicide spraying on the forests of Cape Breton Island.

Elizabeth graduated from Dalhousie Law School in 1983. In 1985 she became active with the Public Interest Advocacy Centre, as well as representing Pollution Probe and Friends of the Earth. During this time May helped found the Canadian Defence Fund with the aim of funding groups and individuals in environmental cases.

Elizabeth became senior policy advisor to then federal Environmental Minister, Tom McMillan, in 1986, where she was instrumental in the creation of several national parks, including South Moresby on Haida Gwaii. She was also involved in negotiating the Montreal Protocol to protect the ozone layer along with new legislation and pollution control measures.

In 1989, Elizabeth became the Executive Director of the Sierra Club of Canada, and for the next seventeen years she built one of Canada’s leading environmental organizations.

At the Green Party of Canada’s national convention in August 2006, Elizabeth was elected the party’s ninth leader. In September 2009, Elizabeth moved to Sydney-by-the-Sea on Vancouver Island, BC and was nominated as the Green Party candidate for the riding of Saanich - Gulf Islands.

In 2009, Elizabeth released her seventh book, Losing Confidence: Power, Politics, and the Crisis in Canadian Democracy.

Despite her exclusion from the televised leadership debates in the 2011 federal election, Elizabeth defeated incumbent Gary Lunn and now sits in Canada’s parliament as the first elected Green Party MP in Canadian history.