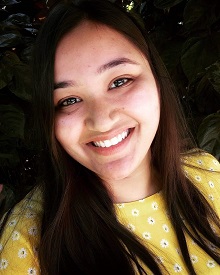 Congrats to Mansi from everyone at SIM! More information about SIM’s awards and scholarships can be found here.

When Stephanie Downs returned to Canada from the UK to become a librarian, she chose to enter the MLIS program at Dalhousie for its sense of community, welcoming faculty and Maritime culture. Diagnosed with cervical cancer at the end of her last year at SIM, Stephanie graduated with her MLIS but lost her hard-fought battle to her illness on May 27th, 2007.

Remembered for her enthusiasm, Stephanie was a “doer” and very active in school life, serving as 2005-2006 Co-Chair of SIMSA and SIM Team Captain for the 2005 Halifax “Run for the Cure”. She was also awarded the Student-to-CLA travel award to attend the 2005 CLA Conference in Calgary. This award was established by Stephanie’s family and friends in her memory.

Mansi is a student in the Master of Information (MI) at Dalhousie University. Originally from India, Mansi earned her Bachelor of Commerce with a double major in Accounting and Statistics. She developed an interest in library studies and joined the Master of Library and Information Science at Gujarat University, India. After completing her library studies, she worked in libraries for 8 years. Throughout her library career in India, Mansi primarily worked with a corporate library of Tata Consultancy Services and then joined the academic library of Architecture and Design University.

She wanted to pursue further study abroad and decided to join the SIM MI program. As an international student, she managed to overcome obstacles in her initial time at the Dalhousie with her positive approach toward everything. As a Dalhousie Libraries Multidisciplinary Intern, Mansi has been working at the Killam, Sexton, and MacRae Libraries and working on projects related to the accessibility of library resources, designing instructional material using technology, and providing reference and research assistance.

Mansi hopes to motivate and inspire students to reach their full potential. She’s volunteered in the Email Buddy program of SIMSA. In this program, she is paired up with one or more incoming MI students to answer any questions they may have before they move to Halifax and begin their studies. She loves to help others and enjoys interacting with new people. She enjoys hiking and staying connected with nature. Mansi lives in Halifax with her husband, Nishit.