Posted by SIM on September 1, 2020 in Students, Research, News 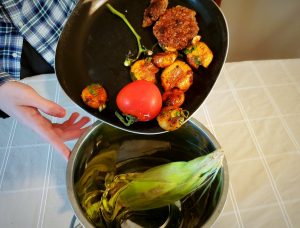 Because of the pandemic, we’re cooking more at home; we’re also wasting a lot more food

A new report released Tuesday suggests that Canadian households are wasting between 20 to 24 million kilograms more food each month since the pandemic began.

The report focusing on food waste in the home during COVID-19 is a collaboration between Dalhousie University’s Agri-Food Analytics Lab and Ontario-based research firm Caddle. It suggests Canadian households are wasting 13.5% more food at home overall, generating 2.3 kg of organic food waste when compared to 2.03 kg per week pre-pandemic.

“It’s not necessarily surprising that people are wasting more food, since they are at home more and cooking more, producing their own meals,” the report’s co-author Erica Finch said in an interview.

“But how much of that food that they’re buying are they using, and how much is being thrown away compared to before the pandemic? That’s the part that’s difficult for us to tell.”

Finch said at the outset of the pandemic when restaurants were closed, people couldn’t eat in restaurants. With options still somewhat limited, they wanted to know how eating more frequently at home was playing out with food waste.

“We know that (the restaurant) sector is producing less food waste but what we wanted to know was, was that food wastage just moving into the domestic sphere or were people being conscious of what they were throwing away,” she said.

Finch said it’s difficult to determine if households are “proportionally” generating more waste than before the pandemic simply because they’re eating more food at home.

“A 13.5% increase at home is consistent with the amount of waste that municipalities are processing,” she said.

The report involved a nationwide survey of 8,272 Canadians who responded between Aug. 21-23. Overall, 55.4% of those surveyed indicate they’re wasting less food in percentage of volume compared to before the pandemic.