Grad profile: “The world is my oyster!” 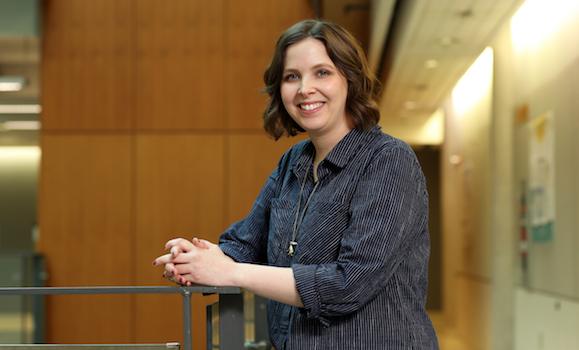 During a recent shift as a library assistant at the Halifax Public Libraries, 2019 Master of Information (MI, the new name for the MLIS program) graduate Rachel Fry found a small crumpled note shoved through the book drop. “It was barely legible, written by a very young child, requesting some books and signed with their name and phone number,” she laughs. “So I called their parents and we ended up having a chat and I talked to the kid and was able to get the books for them!”

It might sound like a little thing, but to Rachel it’s what being a librarian is all about. “It’s building communities, and serving and meeting people’s direct needs,” she explains. “It’s important for librarians and libraries to foster close relationships with their users. It’s not so much about the rules anymore—it’s about asking how we can innovate to be as relevant and helpful as possible.”

Originally from Janetville, Ontario, Rachel grew up on a cattle farm. The seeds of her career as a librarian were planted early. Her first job, at 14, was at her local public library. Her mother also worked as a Library Technician at Fleming College for over 30 years.

She earned a Bachelor of Arts (Honours) from Trent University and graduated on the President’s Honour Roll as a joint major in Sociology and Gender and Women’s Studies. She went on to earn a Master of Arts in Women and Gender Studies at Saint Mary’s University, where she received a Social Science and Humanities Research Council Scholarship, as well as a Fellowship and an Award from SMU’s Faculty of Graduate Studies and. She’s been working with Halifax Public Libraries since 2014 at both the Central Library and Alderney Gate branches.

“I had been thinking about doing my MLIS for quite a while,” says Rachel, “even while I was working on my first Master’s degree. I was able to take an educational leave from one of my jobs at the library, so I took the plunge and registered at Dal.”

“I am so glad that I went back to school. I’ve learned so much, and in this program we’re put in a lot of situations that mirror real life and real work because we do so much group work. I think I learned more in those two years than I did throughout the rest of my education. It taught me a lot about myself and about my strengths and weaknesses.”

In 2018, the School of Information Management selected Rachel as the sixth recipient of the Dalhousie–Horrocks National Leadership Fund. The Fund was established in 2007 to honour Dr. Norman Horrocks, OC, PhD, FCLIP (1927–2010) for his outstanding leadership in the field of librarianship in North America, Australia and Europe. Dr. Horrocks was Director of the School of Information Management and Dean of the Faculty of Management at Dalhousie.

“It was a really awesome surprise to win that award!” says Rachel. It was presented during a public lecture by Camille Callison. A Learning and Organizational Development Librarian at the University of Manitoba, Callison is dedicated to the preservation of Indigenous knowledge, culture and cultural material in a variety of mediums for future generations. “It was amazing to listen to her talk about what librarians can do to incorporate the work of the Truth and Reconciliation Commission into their work.”

“I thought this degree would provide me with a lot of options for the future. I like it all!” she says, smiling. “I tried to take as much as I could from a wide variety of options: legal, archival, knowledge management, geographic information systems.”

On top of her studies and work in the public library system, Rachel worked as a student assistant in the School of Information Management (SIM) office and participated in a mentorship program called SIM Connect, which matches students with mentors who share interests. She ended up exchanging emails for two years with her mentor. “I found his guidance and advice extremely helpful. It was really neat to talk to someone who had been through it and come out the other side,” she says.

For now, Rachel’s staying in Halifax. “I didn’t know that I would end up here, and now I really, really love it. The world is my oyster!”