Wild horses or pests? How to control free‑roaming horses in Alberta

About the author: Tony Walker is an Assistant Professor in the School for Resource and Environmental Studies at Dalhousie University.

Horses roam freely around the world and in many parts of Canada. They can be found on Sable Island in Nova Scotia, in the Bronson Forest in Saskatchewan, the Rocky Mountain Forest Reserve in Alberta, and in the Cholcotin and Brittany Triangle of British Columbia.

In Alberta, free-roaming horses are considered to be a central part of the cultural identity. Although their origins are disputed, there is broad agreement that horses have long been embedded in the culture of Western Canada.

Free-roaming horses can, however, have negative impacts on rangeland ecosystems, causing overgrazing, soil erosion and trampling. These impacts are often worsened by grazing impacts of cattle.

Alberta is currently developing a feral horse management strategy. Owing to their dual status as an introduced and yet culturally significant species of Western Canada, free-roaming horse populations are a contentious environmental management issue in Alberta.

Since the 1950s, Alberta has managed the free-roaming horse population by trapping and culling. Some are sold at auctions and sent to slaughterhouses or shipped to international markets as livestock.

There has been no cull since 2015, but with a birth control research program ending soon, some worry that the government plans to extirpate free-roaming horses in favour of cattle grazing. How will Alberta conserve and manage free-roaming horse populations, while reducing their impact in the sensitive foothill and mountain grasslands?

Horses are culturally and historically important in Canada, and there is broad agreement that horses have long been embedded in the heritage of Western Canada. 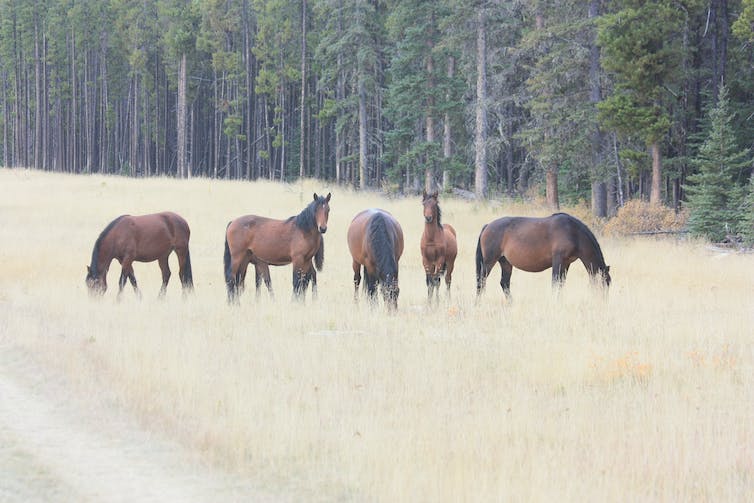 A herd of free-roaming horses in Alberta’s foothills. (Shutterstock)

Some believe the ancestors of Canadian horses descend from horses introduced by early European settlers. Many Indigenous Peoples, such as the Stoney Nakoda First Nation, believe the horses were always present. The cultural importance and spiritual bond between Indigenous Peoples and horses was well established long before Europeans arrived.

Alberta’s foothills run north along the western edge of the province in a series or long ridges and rolling hills. They serve as a headwater catchment, a region of rivers and streams that feeds ecosystems and waterways downstream, for most of Alberta, and are known for their wildlife diversity, including elk, moose, deer and bears.

Free-roaming horses rely on the perennial grasses that grow there for food. Although their diet depends on the season and availability of vegetation, it may overlap with wild ungulates, such as deer and elk, and cattle.

This can lead to overgrazing, cause soil erosion and seedling damage in reforestation areas. Since cattle and free-roaming horses have extensive habitat overlap, this land-use overlap is a source of conflict.

The management of free-roaming horses in Alberta has been highly controversial. 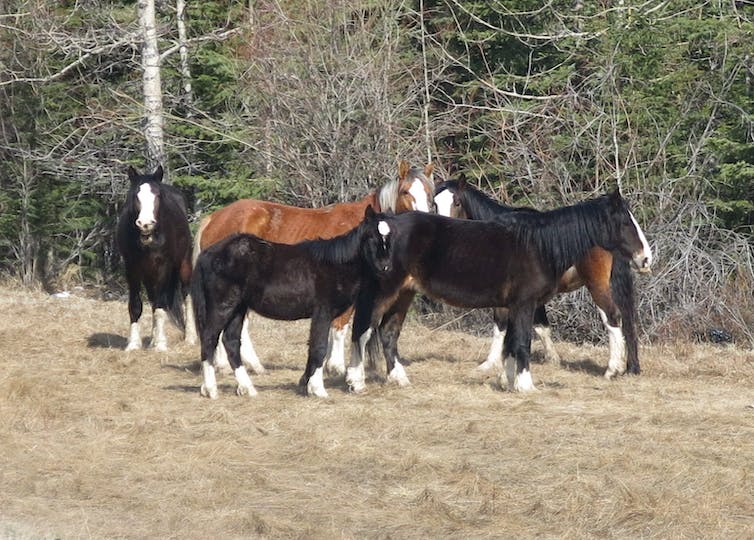 A group of free-ranging horses in north-central Alberta in 2014. THE CANADIAN PRESS/Bill Graveland

Some feel that the horses were introduced and should be treated like invasive species, removed from the landscape by culling or using contraceptive control methods. Others feel that free-roaming horses deserve legal protection due to their cultural importance.

For more than 50 years, the Alberta government has controlled their numbers through occasional culls. Licensed horse-trappers bait and chase the animals. Some are sent to auction, but often go unsold and are sent to slaughter. Approximately 2,000 horses were removed from the foothills between 1962 and 1972, but only 15 to 60 horses were removed between 2004 and 2015.

In 2014, the Wild Horses of Alberta Society began a five-year pilot contraception and field monitoring project. This would, in theory, eliminate the need to round up and kill the horses.

Wildlife contraception programs, however, need to be evaluated to determine if they are working. To do that, the Alberta government would need accurate population data of the free-roaming horses, and studies measuring the benefits of such a program on the ecosystem. Both of these criteria are absent in Alberta’s current management scheme.

In addition, researchers need to determine how many horses can live sustainably within the Rocky Mountain Forest Reserve before expanding the contraception program.

Alberta Environment and Parks is currently developing a feral horse management strategy with the advisory committee, but any strategy will likely fall short because it lacks all the inputs it requires from all stakeholders.

If Alberta is going to take a balanced, holistic approach to how it manages its free-roaming horses, it needs to take into account how different groups value different components of the ecosystem — grasses, game species, horses, watershed — that includes science and Traditional Knowledge.

This article was first published on The Conversation, which features includes relevant and informed articles written by researchers and academics in their areas of expertise and edited by experienced journalists.

Dalhousie University is a founding partner of The Conversation Canada, an online media outlet providing independent, high-quality explanatory journalism. Originally established in Australia in 2011, it has had more than 85 commissioning editors and 30,000-plus academics register as contributors. A full list of articles written by Dalhousie academics can be found on the Conversation Canada website.