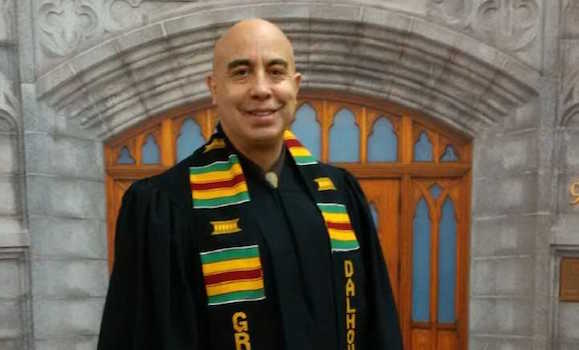 Mature student Roger Beals graduates with a Bachelor of Management

Roger Beals is a study in perseverance. It took him 10 years to complete the first two years of Dalhousie’s Bachelor of Management program. Beals started part-time at the age of 43, taking one class at a time while working as a logistician for the Canadian Armed Forces.

“Once I started university, I figured out that I’d plateaued in the military,” explains Beals. “I never got the mentorship and coaching that I required or desired. As I got older, I knew that I needed something more challenging. As I took all these awesome courses from great professors, I knew I wanted to move on to something I really wanted to do, which is help people.”

Life was not easy for Beals as a young man. “I had some hard, lean years as a teenager,” he says, “and I applied for the military.” It took two and a half years for his application to go through. In the meantime, he got a college diploma in bank telling/data entry and applied to Dal. “One day, I got a batch of letters, one saying I was accepted to the military and the other saying I didn’t get into Dal, so the choice was obvious.” He went on to serve more than 32 years, not realizing that his Dalhousie aspirations weren’t dead, just on hold.

After two decades in the Navy, Beals soon realized that had the opportunity to pursue higher education was never better. “I was nervous when I first started my classes,” he admits. “I didn’t know if I could keep up with it. But most mature students do very well. I ended up with a lot of As right from the beginning. I’m a worker, so I don’t mind spending lots of time doing my work. I like to learn!”

Beals was usually the oldest student in his classes, but that didn’t bother him. “I can adjust to anybody. It’s like being in the military, where you have to work with lots of different people,” he remarks.

Speaking of younger students, Beals was lucky enough to attend Dal with two of his five children, Kyle Fraser and Samuel Dixon. Fraser is in the accelerated nursing program and Dixon is completing a BSc and plans to be a veterinarian. Beals feels he was able to model good study habits for both young men, even taking a class and playing two years of intramural hockey with Fraser. “I’m not a helicopter parent, but it was good,” Beals laughs.

Asked what advice he would offer to other people considering returning to school after a long time away, Beals says, “Prepare, plan and you’ve got to activate it. Don’t just say you’re going to do something. Go explore three schools. Figure out what your passion is. Most mature students have a pretty good idea of where they want to be.”

Beals certainly knows where he wants to be. On top of completing his degree, he graduated from Saint Mary’s in January with a certificate in HR. He has also earned a Disability Management certificate from Dal and passed the Canadian Securities Course. In the fall, he’ll be starting Dalhousie’s Master of Public Administration for Management program part-time. His aspiration to help people is alive and well. “I want to be a case manager with Veterans Affairs Canada, and I’m in the process of applying now,” he says.

Born and raised in Dartmouth, Beals is getting ready to build his dream home in Cherry Brook, and planning on doing some of the work himself.

Where does Beals get his work ethic? “I think I’ve always been that way,” he says. “I think people look at me strange because I’m working all the time. When I was young, I was a quiet, shy, introverted guy, and I wanted a better standard of living, a better life. I was poor, and I didn’t want to be poor anymore. I wanted to get ahead.”