How far things have come since Dr. Andrew Rau-Chaplin’s first computer science class and becoming Dean of the Faculty of Computer Science.

“The first class I took was taught by an astrophysics prof and 20 students shared a single Apple IIe computer and a book on programming in Pascal.”

It was an unlikely background and chance conversation that led Dr. Rau-Chaplin to a future in computer science.

After studying fine arts at the National Academy of Arts, Champaign, IL and University of North Carolina School of the Arts, Dr. Rau-Chaplin worked as a Stage Manager and Sound Designer in Toronto. A show that closed early had him go back to university to “take a few courses”.

“In those days, the registration process was very different,” says Dr. Rau-Chaplin. “I had a phone call with the university, I didn’t know what I wanted to do and was late registering, so they just suggested a few random courses one of which was on programming microcomputers – I didn’t know what programing was or even what a computer was, but it sounded interesting, so I thought why not?”

He hasn’t looked back.

The road to deanship

A rich academic career combined with spells in industry have helped prepare Dr. Rau-Chaplin for leadership and the evolving technological landscape.

After completing his MCS and PhD at Carleton University, he was a Postdoctoral Fellow at DIMACS – a National Science Foundation center run by Princeton University, Rutgers, and AT&T Bell Labs. In 1994 he joined the Technical University of Nova Scotia (TUNS).

In addition to pursing academic research in high performance computing, Dr. Rau-Chaplin has always been interested in its industrial applications. Consulting roles led him to a mid-career return to industry where he led interdisciplinary R&D teams that developed catastrophic risk models for naturals hazards such as earthquakes, tornados, and floods.

In 2012, he returned to Dalhousie bringing with him his industrial experience to start the Risk Analytics Lab where Dr. Rau-Chaplin and his students explored research at the intersection of analytics, risk management, and high-performance computing.

In the last four years, student numbers in the Faculty have grown by 80%; the number of female students studying computer science has increased significantly; and research funding and opportunities have expanded with the addition of initiatives including DeepSense.

“Recognizing that we are in a period where computing is everywhere and transforming the world we live in,” has shaped the priorities and future goals of the Faculty.

One standout achievement is the Faculty’s WeAreAllCS initiative to increase diversity in computer science. Propelled by Dalhousie’s 200th, Dr. Rau-Chaplin and his team set a goal to double the number of female students entering first year computer science in 2018 – a goal that was surpassed with growth in female students reaching 144%.

“It’s critical that computer scientists, the people who are building the future and the world we are living in, reflect the diversity of the whole of society,” says Dr. Rau-Chaplin. “I’m extremely proud that working with our partners inside and outside of the university we have started to witness a real change. We’re part of an important pipeline that starts in K-12, through university and into industry.”

Managing rapid growth has been a constant focus across all fronts for the Faculty, from curriculum design to student engagement.

“We have more students enrolled in our programs than all other university-level computer science programs in the Maritimes combined,” says Dr. Rau-Chaplin. “Figuring out how to meet their needs and how we continue to grow with excellence is really important.

“I’ve been working closely with faculty members to clearly articulate the key values and differentiators of our programs and to enrich our curriculum - I truly believe that the strength of an academic unit is directly related to the strength of the core curriculum.

“A great educational experience does not happen by accident.”

The world has changed significantly since Dr. Rau-Chaplin’s time as an undergraduate student. He is Dean at a time where computing technology is transforming both industry and society. As he moves into the fifth year in his position, he is looking at big questions and big opportunities.

“The fundamental question right now is what place does computer science have in the context of a modern research-oriented university?” Dr. Rau-Chaplin says.

“We are now experiencing widespread digital transformation, as the discipline of computing changes we need to figure out how to engage not only in the design of new technologies but in the wider questions of how technology is used in the context of organizations and society.” 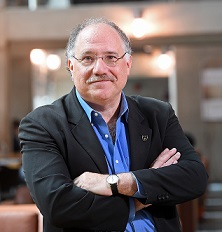 “If we are going to serve the Province, industry and our students there needs to be collaboration and coordination between the university and K-12, and the university and industry. Our WeAreAllCS initiative is a great example of this, real change is not possible unless all three parties are involved.”

“How can we use this once in a generation growth to become a stronger, more relevant, more research active, more engaged and inclusive unit?”

1.     When you were a student, what was your favourite course?

Probably a philosophy course in symbolic logic, I just got it.

Travelling, I try and see one really new place a year – this year it’ll be Japan.

3.     If you could only bring one artist’s music with you to a desert island, who would it be?

If I had to choose one, Philip Glass.

4.     If you were to leave academia and go into any career you wanted, what would you choose?

I’d go back to the corporate world. I found my recent experience in industry engaging and it made me realize just how much traction academic skills and ideas have in the wider world.

It comes down to two words, “be brave”.