Posted by Faculty of Computer Science on December 17, 2018 in Faculty 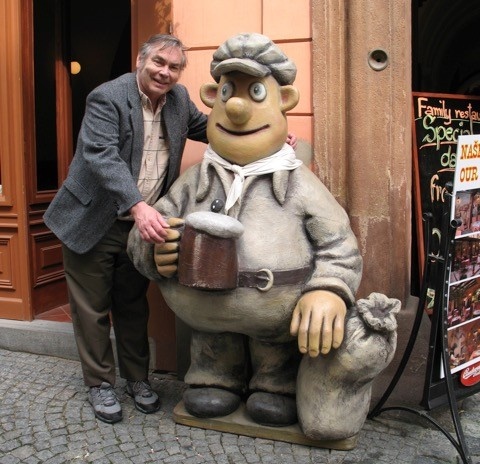 True to his name, Morven was a gentle man. He loved mathematics, computer science, his family and friends, his students, nature, history, word-play and problem solving of any kind.

He was born in Calgary, Alberta, the third of four children of Scottish parents who highly valued education. The family moved to Lethbridge, and he went to local schools where he excelled in science and mathematics. As a kid, he built model planes and developed a passion for aviation, winning an award as Canada's top Air Cadet while in high school. He had hoped to pursue aeronautical engineering in university, but the timing was poor as Canada's Avro Arrow aviation project had just been cancelled. Instead he chose to enter the Mathematical Physics program at McGill University in Montreal, graduating with a B.Sc in 1963, and going on to graduate studies at Princeton University on a Woodrow Wilson scholarship. He earned a Ph.D. in Mathematics under John Tukey in 1965, and his work with Gordon Sande on the Fast Fourier Transform was his first of many publications in the years following.

Upon graduation, he took up a position at Bell Labs in Murray Hill, New Jersey, then moved to England, where he worked at the National Physical Laboratory (NPL) in Teddington with James Wilkinson, a prominent figure in the field of numerical analysis. After a year at NPL, he moved back to Canada to work as a faculty member at the University of Waterloo, joining the Applied Analysis and Computer Science department, plus, later, the Statistics department. He was the first director of the University of Waterloo Mathematics Faculty Computing Facility (MFCF), where he established the Software Development Group that served as an important training ground for many who subsequently worked in the Canadian computing industry.

In 1982, he moved to the National Research Council in Ottawa, joining the Institute for Information Technology, Software Engineering Laboratory, where he led a team developing the Harmony operating system. He also served as director of the Consortium for Graduate Studies in Software Engineering (ConGESE), and co-led, with Dr. Jacob Slonim, the establishment of a Consortium for Software Engineering Research (CSER) that included universities from across Canada. In 2000, Morven joined the Faculty of Computer Science at Dalhousie University as the director of the new Global Information Networking Institute (GINI), During this time he also served as a professor for Computer Science and taught a course in Industrial Engineering.

His deep understanding of software, ranging from his initial focus on mathematical and statistical computation and real-time systems, to then more generally on commercial applications, has consistently been recognized as a significant contribution to the field of Applied Computer Science. He retired in 2008, but continued interacting with students, one of his favourite activies, for many years.

Morven touched many lives over the years. He is survived by two extraordinary wives (from different eras), two beloved daughters, three amazing sisters, two wonderful grandchildren, two eccentric cats, a pond full of koi, a large extended family, all of whom loved him, and an extensive network of friends, students, and colleagues, who will miss him dearly. He was one of a kind.

A memorial gathering where we can share our favourite stories about Morven is being planned for spring, 2019. Morven loved his students, so, in lieu of flowers, please donate to the Morven Gentleman Memorial Scholarship Fund: http://giving.dal.ca/gentleman or 902-494-2071.

Memories & acknowledgements from our Faculty...

Of extra note shared by Dr. Mike Smit: Dr. Gentleman was recognized in 2005 by IBM Canada as one of the Pioneers of Computing in Canada, as someone who was involved in "developing and nurturing computer science research and education programs" in Canada. One of his quotes in the profile on him was: "Research at the individual level is great fun, but limited in what it can achieve. Most significant advances in Information Technology require team efforts."

"I had the pleasure, as a Masters student, of sitting at his table at the awards dinner in Toronto. He told me about some of his experiences trying to convince decision-makers that this computer thing was important... how right he was!  I remember fondly his devoted commitment to students, especially in regard to considering how to prepare graduates that are likely to find success in their careers." - Dr. Mike Smit

"I first met Morven Gentlemen many years ago. He was already an established faculty member at Waterloo, and I  had just arrived in Canada as a visiting professor in a small Computer Science department in the Toronto area. I wanted to ask somebody for advice about connecting with, and eventually joining, a more research-intensive environment. One of the local colleagues suggested Morven’s name. I called him out of the blue and asked for a meeting, and he agreed, even though he had no idea who I was. He gave me at least thirty minutes of his time, heard me out, and gave me a very clear piece of advice: come to seminars, write papers and get grants. I am forever grateful to him for this guidance, and I keep giving this very same advice to young people who now come to me with the same question." - Dr. Stan Matwin

"I remember him as a wonderful colleague who has contributed greatly to the Faculty, especially during its early years leading up from the amalgamation. He worked with us on our first big successful CFI proposal which brought in major infrastructure. He was also instrumental in developing the curriculum for the Software Architecture related courses. He had the knack of looking at academic CS problems with an industry-lens, which came from his years of industry work experience. We will miss him very much." - Dr. Srini Sampalli

"I had tremendous respect for Morven. I enjoyed talking about things with Morven whether it was Faculty politics or computer science. He was a software engineer, I a theoretician, so I expected us to have diametrically opposed views on almost anything CS. Morven’s pragmatism, as a computer scientist, and his unapologetic outspokenness, as a person, always inspired me and I enjoyed many conversations with him where I found we agreed on many more things than we disagreed on, sometimes not initially but after an energetic discussion that made us both learn things and see things from a different angle. I’m sad to learn that he has passed away. He was a great asset to Dalhousie FCS and to the broader CS community." - Dr. Norbert Zeh

"I am very sorry to hear about the passing of Morven.  It was a pleasure to be his colleague.  I always enjoyed discussions with him whether it was about research, teaching, committee work or any other topic.  He talked in a thoughtful way with some humour, which was a treat to listen to. His advice and opinions were based on his whole treasure of experience and knowledge.  For a while we had a small research group named Programming Interest Group, and also had participated in our programming competitions email list before and after he retired.  Among many achievements, he was apart of the great Bell Labs team that gave Unix and C to the community. One of his recollections from that time was that there used to be a banner in the corridor of the Computer Systems Research Lab at Bell Labs that read "Our increased success is primarily due to our reduced objectives".  It contains a non-obvious but great wisdom for systems building in computer science." - Dr. Vlado Keselj

"I really enjoyed conversations with Morven. He did indeed have much industrial focus, but he was a scholar through and through." - Dr. Thomas Trappenberg