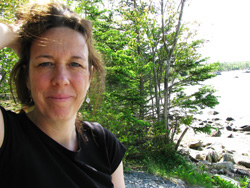 The Department of English and the Creative Writing Program are pleased to host Sue Goyette as Dalhousie’s Writer-in-Residence.

Sue's collection Ocean was the recipient of the 2015 Lieutenant Governor of Nova Scotia Masterworks Arts Award, which recognizes the excellence of a particular work of art or design from any media.

Sue has been a member of the faculty of The Maritime Writers' Workshop, The Banff Wired Studio, The Sage Hill Writing Experience, and has taught numerous creative writing courses at Dalhousie.