What our Students Say 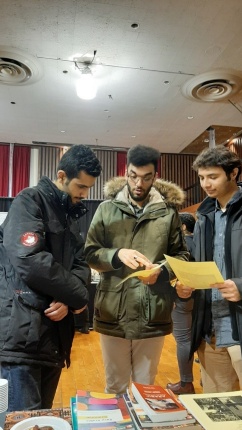 Hasan explaining that the Arabic grammar is quite easy. 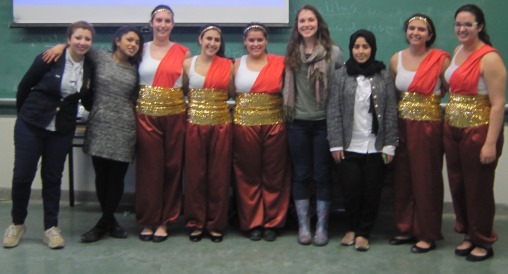 "My main reason for choosing to learn Arabic is cultural curiosity. We receive a one-sided, often vitriolic picture of Arab and Muslim culture in the news and from politicians, which naturally tells less than the whole story." Aaron Baltz

"I chose to study Arabic because I plan to pursue my Masters in the near future in Spanish Linguistics in Southern Spain in Andalucia. This region of Spain has a large Arabic influence historically, but also culturally and linguistically. My newfound knowledge of Arabic will help me to understand the culture of Andalucia and the linguistic influence of Arabic on the Spanish language, which is deeply rooted." Meredith S.C. Hand

"I was interested in taking Arabic because it was a language I thought I would easily grasp because of my proficiency in Hebrew. I also have an interest in International Development and Arabic is spoken largely throughouth Northern and Eastern Africa, where I plan to work." Arielle Cohen

"After doing some work at a refugee camp while on a university exchange, I became inspired to learn Arabic. It is a beautiful language and I would love to work in Arabic-speaking countries in the future." Lacey McDonald

"I am half-Lebanese and was born and raised in Newfoundland. My Dad's side of the family is Lebanese, but born on Bell Island, NL. I know a bit about the culture, but not enough. I have always promised myself that I would learn more about where I come from. I think the Arabic language, and everything about Lebanon is beautiful. My goal is to learn as much as I can. I am so excited to have this opportunity." Allison Basha

"The reason I chose to learn Arabic is becasue I have a love of languages and Arabic has always intrigued me because its alphabet is so totally different. I also want to learn more about Arabic culture these days. I think it is important to understand different cultures and learning the language is one way of doing this." Ann Euloth

"Even though I am from Arabic origins, I find myself struggling to understand any form of the language above the elementary level. I think this class will help me sharpen my skills and allow me to further my understanding so I can function and communicate properly in an Arabic setting." Noor Al Silwadi

"I chose Arabic for my language credit because I wanted a challenge. I am very interested in the chance to learn a new alphabet. Furthermore, Arabic is a language spoken by a large part of the world's population, with a very different culture from my own. I want to learn about this part of the world." Cameron Roberts

"I chose Arabic as my language course because it is very interesting to me. My father's side of the family is from Trinidad and Tobago and some there practise the Muslim religion. I wanted to educate myself in the language and thought it would be a fun learning experience." Jessie Ali

"I have an intense interest and curiosity in the Arabic language and culture. I would also like to learn the language to open up future job possibilities." Samuel Pendleton

"Arabic is spoken by over 300 million people around the world and that alone is enough to make me want to learn it. Both historically and currently, it has proven to be an important language. Its significance is undeniable and I feel that it is a useful language to learn." Sahar Yousefi

"I'm a student of political science, focusing on international security and defense policy. As such, I decided to study Arabic as the Middle East and Arabic world are topical in this field and hold a great deal of importance for policies in the West." Matthew Gillis

"I am originally Syrian, but I studied in the American School in Damascus. So, even though I lived in Syria, I did not learn proper Arabic. I am looking to improve my native language." Omar Zein

"I chose Arabic because I'm an International Development Studies student and someday I'd like to work in the Arab countries, helping the communities with development. I'm mostly interested in the Northern African countries." Manal Latif