Posted by stephanie rogers on March 11, 2021 in News
Southan Farms grows three varieties of hops on five acres of land.

When the opportunity presented itself for Nick Southan to utilize land on his family farm, in Wicklow, NB, after graduating from NSAC, he didn’t think twice. Representing the fourth generation on the large-scale potato farm which has been in Nick’s family since the early 1900s, Nick and his wife, Kathryn (Farrell), settled into the farmhouse.

Although it would take time and several business plans before they started farming the land.

“We weren’t interested in farming potatoes, as my dad, grandfather and great-grandfather had done,” Nick says. “But we knew we wanted to farm.”

Nick and Kathryn took jobs with the federal government, applying the skills learned at NSAC. Nick spent his evenings and weekends drafting different business plans, as he considered different opportunities for the farm. Kathryn would then crunch the numbers, looking for something workable.

“Time and time again the numbers would tell the tale of a business idea that just wasn't viable,” says Kathryn. Until one day, Nick and Kathryn heard of an industry faced with a crop shortage. The increasingly growing craft beer industry needed more hops.

“Nick brought me a business idea and the numbers to go with starting up a hop farm. The projections showed that this was something we could make a reality,” she says.

Hops are key components of a beer’s aroma and flavour, while also keeping the cool beverage fresher, longer. With so many craft breweries popping up throughout Atlantic Canada, breweries were having a hard time securing sufficient quantities of the flowery ingredient for production. Hops require a lot of manual labour – from planting through harvesting. And not a lot of mechanization is available to aid those farming the crop.

“Setting up a hop yard involves creating a trellis with a grid of 18-foot poles and thousands of feet of aircraft cable. The plants themselves are perennial and must be planted by hand, either as a piece of root stock or a plantlet,” explains Nick. “Since they are a climbing plant, they need a string to be tied and clipped into place that they can use to grow upwards of 20 feet.”

Each spring two strings of coconut coir are clipped into place near the crown of each hop plant and tied, by hand, to the cable running across the top of the trellis. The clipping of the coconut coir is done, also by hand, with a special applicator tool that inserts a metal clip into the ground to secure the strings in place.

“We currently have six acres of hops with approximately 900 plants per acre which amounts to 5400 plants that require tying and clipping 10,800 strings into place every single year,” adds Kathryn.

“When the plants have reached approximately 10-12 feet, in height, the bottom four feet of foliage is stripped off by hand to allow for an increase in air flow and a decrease in insect pressure,” continues Nick. “When it is time to harvest, the plants must be cut, by hand, and transported to the stationary harvester. The harvesting of the hop cones, the drying process as well as the pelleting process is fully mechanized.”

The final product at Southan Farms is then sold to breweries including Upstreet Craft Brewing, Picaroon’s, Trider’s, Cavok, Grimross, and Maybee Brewing. All producing a very different tasty and refreshing beverage. 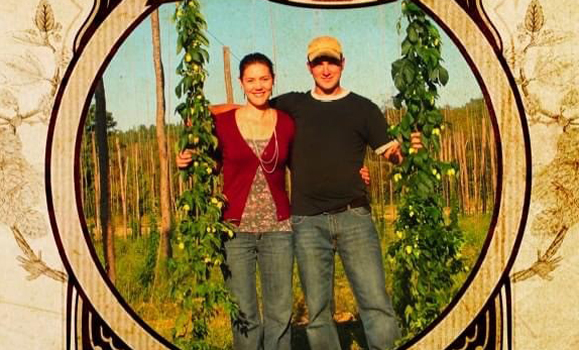 “Starting out, we didn’t have a lot of access to operating money,” says Kathryn. As recent graduates (and newlyweds), with little to no equity, the pair was faced with a challenge. “The large capital investment required for the infrastructure, as well as the necessary processing equipment was difficult to secure as hops were not a proven crop in the Maritimes,” she adds.

With lending institutions being wary to provide backing to a commodity they weren’t sure would have the ability to grow in this area, Kathryn and Nick had to rely on significant amounts of volunteer labour for the first few seasons.

Nick and Kathryn’s perseverance has resulted in a successful family operation, keeping them both busy day and night.

“Most days I can be found answering emails, preparing invoices, delivering hops (and children), entering payroll and any other office work that is required depending on the time of year,” says Kathryn. “During the busier times of the season that require additional labour, I fill in where I am needed for tasks like stringing, training, pruning, and harvesting.”

Nick is responsible for everything from spraying to scouting to fertilizing, irrigating and everything in between. His days start early and end late all four seasons of the year.

Agriculture is important to the mighty duo and they are proud of their contributions to the industry.

“Agriculture provides an opportunity to build something from the ground up and literally watch it grow,” says Kathryn. “It forces us to have an intense relationship with Mother Nature. The sense of accomplishment when you achieve success for yourself is like no other.”

“The nature of the industry teaches resilience and about the ability to start over new each year. By working firsthand in the agricultural industry, it allows us to have a direct impact on the planet we are leaving for our children,” adds Nick.

Nick and Kathryn’s two daughters, Madison and Isabella (aged 13 and nine), are learning first-hand the value of hard work and the daily selflessness that it takes to keep things running. Something that is also important to their family operation.

“Our kids (and all farm kids) are lovers of all things outdoors and find simple joys in many things other people don’t appreciate,” says Kathryn. “There is a certain amount of pride that can be taken in what you do each day, and children growing up on a farm are able to take pride in their contributions as well.”

As for the future, the hands at Southan Farms will get busier. Nick and Kathryn hope to at least double their hopyard acreage in the next 10 years and secure contracts for additional small to mid-size breweries throughout the Maritimes.

“This is our lifestyle. It may have taken us time and hard work to get to this point, it’s always going to take hard work, but we love it.”