Posted by stephanie rogers on October 21, 2019 in News
Congratulations to our Athletes of the Week!

At this past weekend’s UNB Woodsmen Competition the DAL AC Men’s and Women’s A teams defended their titles from last season placing first and bringing back home the two UNB trophies. The Women’s B Team also had a strong showing placing third with the Men’s B team fourth. Both the men’s women’s teams won by over 200 points starting the season on a very strong note. Coach Larkin was “Very happy and proud” of the Dal AC athletes. “They performed very well and conducted themselves with great professionalism.”

Below is a list of all the events DAL AC won:

The DAL – AC Rams competed this weekend in the 3rd race of the season, hosted by MSVU in Point Pleasant Park, Halifax.  A very technical course, with varied surfaces and obstacles, the Rams took it easy so to avoid any unwanted injuries since the championships are a mere two weeks away.  Kim Conrad came in first for the DalAC Women, 8th place overall.  She was followed by Chloe Toombs, 9th place, and then Elise Lawrence, who had special spectators from across the Atlantic Ocean.  On the men’s side, Kieran Thornell continued to be a force, running in second place just 2 seconds behind the MSVU first place runner.  He was followed by Ranthom Ndizihiwe, who is consistently moving up the ranks and ran 7th overall.  The women’s team finished 4th, and the men’s team finished 2nd overall.  In 2 weeks the team will travel to PEI for the ACAA championships, where anything is possible.

Team Dal AC finished another strong showing in the Atlantic Intercollegiate Equestrian League on a beautiful sunny day down in Aylesford. While they were just shy of bringing home a team placing ribbon, the high point rider and reserve high point rider of the day were both from Dal AC!

The team also brought home the "Most Team Spirit” award for showing the utmost respect and support for their teammates.  "Toes up, heels down, Rams are ready to rock this round!"

Coach Sarah Fifield appointed the DAL AC 'rider of the show' to Emily O'Leary for being a proven consistent superstar! She placed first in her class yet again and was very humbly shocked about it. She rode 'Berlin,' a rather challenging horse that was almost pulled from competition after warm up for 'naughty' behaviour. Emily, however, made her jump around the course with a consistent pace and flawless execution of the obstacles. Great ride Emily!

A hard fought game with emotions running high ended in a thrilling 4-3 win for the RAMS giving them their second win on the season and solidifying 6th place in the league.

For the team’s final game of the season none expected the RAMS had the tall task of hosting the leagues number 1 team, Holland College. After losing their head coach Craig MacEachern to controversial call the night before (forced to sit out the following game as per league rules after being tossed for arguing the officials decision and sticking up for his team) DAL AC came out and left everything on the field. This was a game to remember with the boys earning a 3-3 tie stunning their opponents. The RAMS now enter the offseason with plenty of optimism of what lies ahead and a strong foundation to build on for 2020.

Dal AC was in control of this one from start to finish earning a 5-0 win and keeping their season alive for another day with a chance (albeit slim) of being in a tiebreaker for the 4th and final playoff spot.

Still in contention for playoffs the RAMS gave everything they had against the top seeded Holland College team. The final score was 6-3 Holland, however, the girls fought right until the end scoring the final 2 goals of the game. The RAMS finished 6th overall just shy of 5th place.


Sian Rankin, playing in her last game for the RAMS scored again bringing her season total up to 9 and good for 3rd place in the league scoring race. In 4 years with Dal AC Sian has 43 goals and will once again (4th time overall) be an ACAA 1st Team All Star!

It was an exciting weekend at the Tip-off pre season tournament held at MSVU and UKC.  Dal AC finished third out of seven with four wins against MSVU, UKC, USA and Holland and two losses against STU and MTA.  Overall it was a very positive start to our season and the girls should be very proud of their effort.


DAL AC Athletes of the Week

David George (Woodsmen) is this weeks Male Athlete of the Week. David dominated his events this past weekend in winning both the water boil and the underhand chop. His strong showing also helped Dal AC Men’s A team win all 4 team events, and win the UNB competition.

Hillary Schramm (Woodsmen) is this weeks Female Athlete of the Week. Hillary was a force in her events this past weekend winning both the single buck and quarter split. Her strong showing set the tone for the DAL AC Women’s A team who won 3 of 4 of the team events to win the UNB competition. 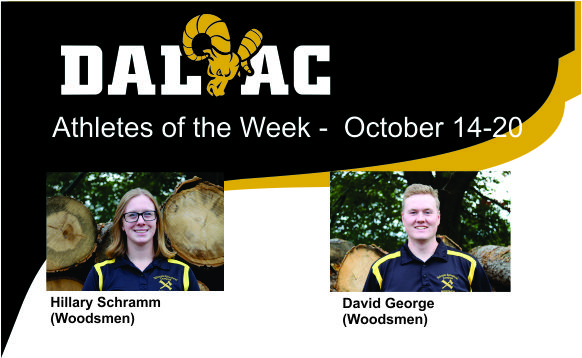