Beyond Transparency in Pharmaceutical Research and Regulation

Making pharmaceutical safety and effectiveness evidence transparent, i.e. accessible, to physicians, researchers, healthcare payers, and ultimately patients is an essential but elusive goal. Consider the drug rofecoxib (Vioxx). It was approved in Canada and elsewhere in 1999 for treating arthritis only to be withdrawn from markets in 2004, before which thousands of patients who took Vioxx are estimated to have suffered cardiac arrest and death. Regulatory officials had prior knowledge of this safety risk but kept it confidential on the grounds that information was the drug manufacturer’s property. Following Vioxx and similar cases a variety of new laws and policies were put into place to increase the transparency of pharmaceutical evidence and regulators’ decision-making. Most recently, Parliament enacted Bill C-17, “Vanessa’s Law”, arming Health Canada with several new powers, including the ability to make drug safety and effectiveness information more transparent. However, meaningful improvements in transparency have been slow to arrive; changing the real world practices of regulators and clinical researchers, much less industry, remains a huge challenge.

Working with Health Canada and other key knowledge users we will determine:

With expertise in law, medicine, epidemiology, anthropology, political science, and bioethics, our multidisciplinary team is uniquely positioned to identify and help overcome barriers to pharmaceutical transparency for the benefit of Canadians. 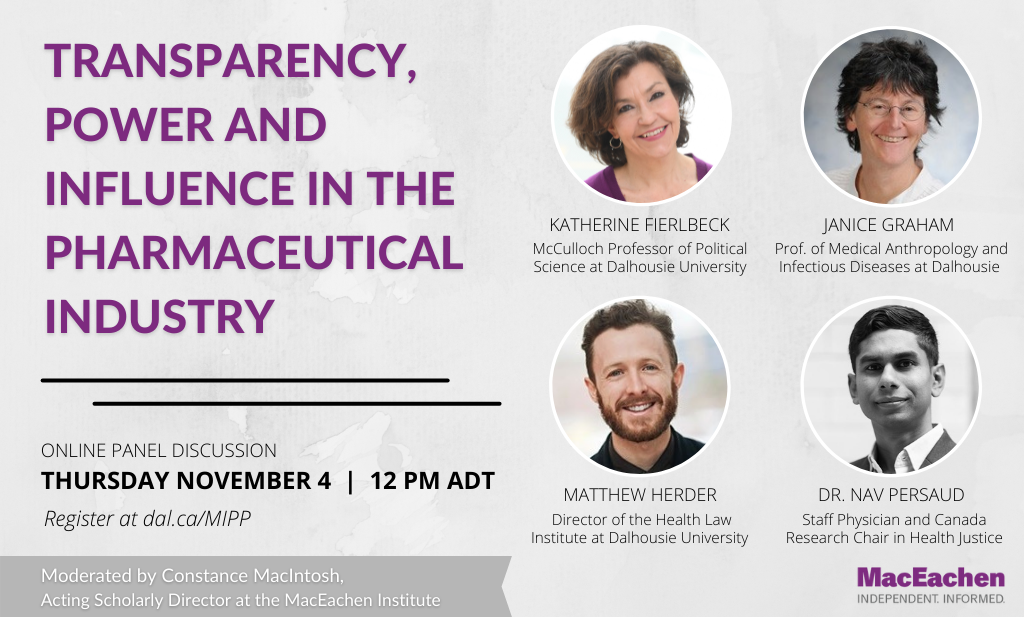 Transparency, Power and Influence in the Pharmaceutical Industry panel hosted by the The MacEachen Institute for Public Policy and Governance - Watch the recording here.