Dylan Ormiston and Emran Billah have a complicated challenge on their hands. They’ve been tasked with developing a device that will allow NASA scientists to collect data from Venus over extended periods of time.

The issue: with its sulfuric acid clouds, temperatures over 450 degrees Celsius, and extremely high surface pressures, Venus is one of the most hostile planetary environments in the solar system. That means prior missions to the planet have only survived for two hours.
Dylan and Emran’s project is part of the International NASA Space Apps Challenge. A 48-hour hackathon event that simultaneously took place in over 200 cities around the world this past weekend.

With its unique appeal to the Atlantic region, the event drew in a number of key sponsors including Intertalk Critical Information Systems, MDA, and Lixar IT.

Sixty participants from across the Maritimes gathered at Shiftkeys Labs in the Faculty of Computer Science to take part in the coding fest.

Teams of five were assigned challenges developed by NASA or the Canadian Space Agency (CSA). Many centered around data analysis and finding solutions to problems related to space and earth.

While some may associate hackathon events with computer programming, a number of participants from Dalhousie’s Faculty of Engineering were instantly drawn to this weekend’s competition.

Dylan, a 4th year mechanical engineering student, and Emran, a recent graduate of Dalhousie’s Department of Electrical and Computer Engineering, are also members of the Dalhousie Space Systems team: a group dedicated to space exploration.

A Star Wars junkie growing up, Dylan says the chance to work with NASA and CSA was an opportunity he couldn’t miss.

“Space is so mysterious, so foreign, so alien. From an engineering standpoint, when it comes to space, you only have one shot at solving a problem and there are so many different factors you have to consider when designing something,” he says. 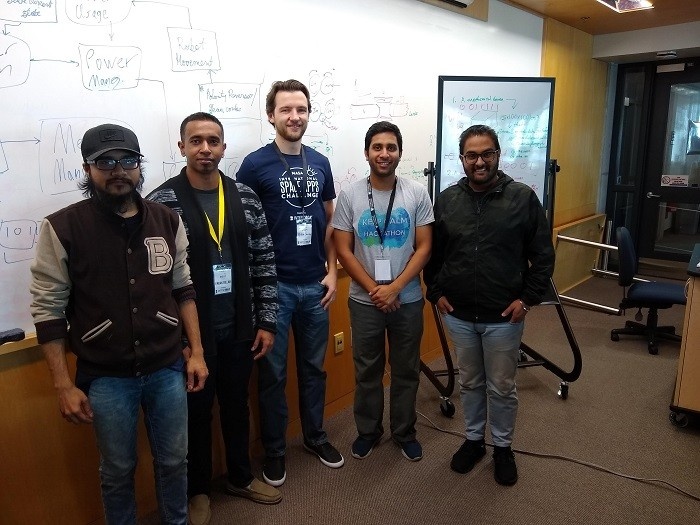 Finding an innovative way to collect and return valuable long-term science data from Venus wasn’t an easy task, especially on a tight deadline.

“When we were working together we could really see how many different ideas came together just because of that. We weren’t limited or cornered to thinking one way,” says Emran.

In conducting their research, they discovered that given Venus’ high pressure and temperatures, conventional rovers would melt within minutes of landing on the planet. That, combined with electromagnetic disturbances of waves with frequencies of more than 700 Hz, makes the use of traditional electromagnetic devices redundant in the environment.

“That gave us an idea of the type of approach we needed to take. We knew we had to go back to old school style memory systems made of majorly mechanical parts and simple analog electronics, and that’s where the ideation process started,” says Emran.

With a number of industry members on hand to judge and mentor participants at the event, the team was able to engage with CSA scientists to get advice and feedback on the validity of their design.

What they came up with was a project inspired by a Rubik’s cube in which different components of the cube could be manipulated mechanically to store a different data value.

“What that means is that the number of input combinations that can be achieved with this design could meet and surpass the 1MB of storage that was required in the challenge,” says Dylan. “That objective was the big selling point for the challenge.”

The second part of the challenge was designing a power reversing system.

“Using conventional electronics, the polarity of a motor can be reversed, to change the direction of power transfer,” says Dylan. “However, based on the hostile environment on Venus, a mechanical system with as few parts as possible was desired to make the system more reliable.”

Dylan says the design of the mechanical reverser was inspired by a traditional reverse gear shift similar to an automobile transmission.

He adds that the opportunity to showcase his engineering skills in the hackathon, and to learn from participants in other disciplines was a driving force in competing in the competition. 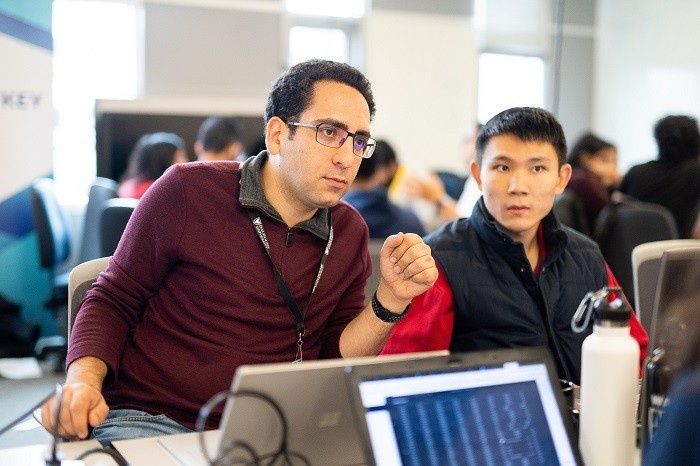 Across the room, Reza Rahimi and his sister Fatemeh Rahimi huddled around a Surface Pro contemplating how to assist Canadian scientists in protecting the population from solar flares. The siblings hoped to find a way to improve geomagnetic data sets that are essential for monitoring the earth’s magnetic field.

For Reza, the chance to compete in this weekend’s event was an opportunity to showcase the versatility of his engineering degree and explore his entrepreneurial spirit.

A 4th year PhD student in Dal’s department of Civil Engineering, his recent thesis research helped prepare him for the hackathon.

“My thesis was about accelerating an engineering software and included a lot of coding and programming,” he says.

He’s also in the process of launching his own business venture, developing a unique engineering software product that he hopes to soon commercialize in Canada.

Having already taken part in Dalhousie’s Collide Program and Launchpad Accelerator, courses geared towards students interested in hatching entrepreneurial opportunities, Reza says this weekend he was able to put the skills he’s learned to the test.

Partnering with his sister, a 2nd year Master’s student in Dal’s Computer Science program, and three other students also from the Faculty of Computer Science, Reza says each participant had a vital role to play in solving their space apps challenge. For Reza, that meant tackling the software optimization of their application.

He says he wishes more hackathons such as the NASA Space Apps challenges would take place in Halifax, exposing participants to not only the mysteries of space, but the world of entrepreneurial opportunities.

“We need entrepreneurs in Canada; we need people who take risks and start big things. I believe that Canada is the new Silicon Valley. I think we have the potential and we just need to teach people how to be entrepreneurs and help them go down this path,” he says.