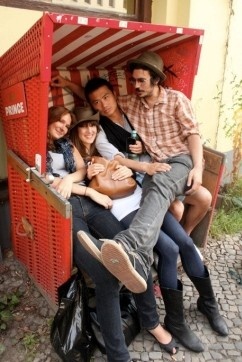 Study abroad as part of the honours program. Learn more by clicking on the BA Honours in European Studies headline on the left.

European Studies is a combined offering allowing you to choose classes from among 17 different programs and departments across Dalhousie's Faculty of Arts and Social Sciences and the University of King's College. It encourages you to develop a broad perspective on Europe as seen through its history and politics, literature and ideas, and the fine arts. There is also an emphasis on learning a language.

BA with a Major in European Studies

A student would normally take 30 credit hours in the first year, meeting the distribution requirements of the BA. These courses include:

Note: Completion of the King’s College Foundation Year Program satisfies the first-year requirements for the European Studies 120 credit hour Major, with the exception of the language course and the natural science course.

Students should aim, with help from the European Studies Coordinator, for a balance in their courses to reflect the three general areas outlined above.

A student would normally take 30 credit hours in the first year, meeting the distribution requirements of the BA. These courses include:

Notes: Completion of the King’s College Foundation Year Program satisfies the first-year requirements for European Studies, with the exception of the language course and the natural sciences course.

Some students may wish to take another "second language" course in the first year, and postpone one of the other courses until a later year.

The program consists of a further 90 credit hours including the second year core course and an Honours project. The general requirements for the program are:

Approved ES courses in Contemporary Studies, Early Modern History, and Gender and Women's Studies may fit one or more of these groupings. Please consult a European Studies advisor.

In conjunction with the Honours project a fourth year multidisciplinary seminar is required.

All classes for 2022-2023 are being offered In-Person where possible.  Covid-19 is an ever changing challenge and courses may be moved On-line if required.

** Always check the Official Timetable to verify days/times. In the case of a discrepancy between this list and the Timetable, the Timetable will be the official source.

Questions? Our faculty and the European Studies Coordinator are always ready to help if you have any questions. Contact us.