As Li-ion cells age some of the electrolyte inside the cells is consumed and turned into new compounds. These reactions decrease the cell capacity, which can ultimately lead to cell death.  It is important to understand how the electrolyte evolves as the cell undergoes charge/discharge cycling.  Usually, this requires direct analysis of the electrolyte where cells are disassembled and the electrolyte is analysed.  Li-ion DTA circumvents cell destruction by monitoring the temperature of the cell as it is moved through the melting point of the electrolyte. The temperature of a material does not change during a phase change, so the cell will give a temperature-time signal that describes the phase changes in the electrolyte. The experimental method involves measuring the difference in temperature versus time between the sample cell, which has an electrolyte which can be frozen, and a reference cell having the same heat capacity, but filled with an electrolyte that cannot be frozen.  Since the method is based on the temperature difference, it is called differential thermal analysis.  Figure 1 shows the Li-ion DTA experimental set up with two rigs in use. The left ring tests small pouch cells, while the right ring tests cylindrical cells.  In the photo, both rigs are in use, inside the liquid nitrogen dewars.  Figure 2 shows sample data from three different cell chemistries, before and after the first charge of the cells.  The features in the graphs in Figure 2 can be understood based on the phase diagram of the electrolyte. 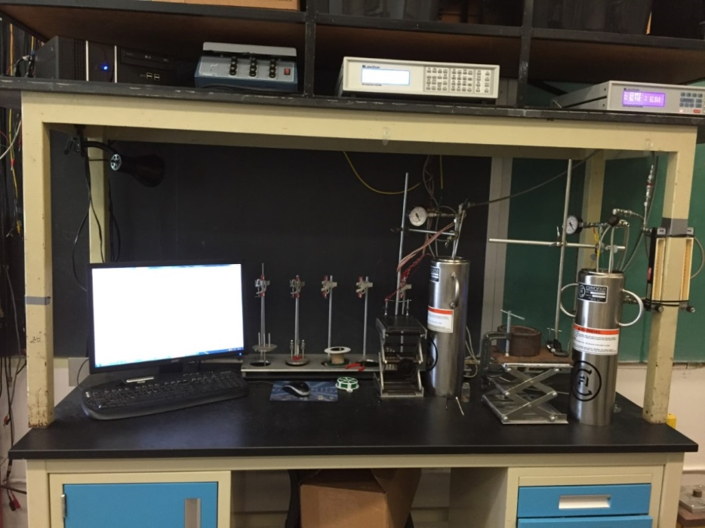