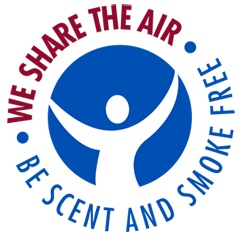 Breathe Easy '06 is a co-operative effort of Facilities Management, Student Services, Communications and Marketing and the Environmental Health and Safety Office to remind faculty, staff and students of the University's long standing efforts to provide a scent-free and smoke-free environment. The "Breathe Easy" slogan was chosen by a group of students who participated in a focus group created by Communications and Marketing.

Prior to the mid 1990's, Halifax, like cities, everywhere had a small number of people who reported that they were made ill by exposures to scented products and other materials which most are easily able to tolerate. Because it was a condition that had not received much attention by either the medical community or the media, many of these people were more or less marginalized.

However, in the mid 1900's, Halifax experienced a severe indoor air quality problem at Camp Hill, one of the city’s major hospitals. At its peak over 600 people were off work as a result of illness Included among this number were doctors, nurses, and other health professionals whose dedication to their work and their patients was beyond question. Years after the situation was resolved some people are still unable to return to work or to their pre-outbreak health status. Many of these people report scented products are among the environmental stressors which induce bouts of illness. There are of course others among the university community who share these sensitivities who did not work at Camp Hill.

As there are very close professional and personal contacts between the university community and the hospitals, the university was profoundly impacted by the situation. Looked at more broadly Halifax is quite a small city. As a consequence most citizens of Halifax personally knew someone who had been impacted by the Camp Hill situation. As a result, both the university community and the general public were well disposed towards the very credible victims of the hospital problem. This personal experience meant that, as area institutions began to respond to the needs of these scent-sensitive people, they did not have to deal with the skepticism which elsewhere sometimes makes it difficult to deal with these issues.

Although at Dalhousie we like to think of ourselves as leaders in this area, it is thus perhaps not surprising that we are among a large group of organizations in and around Halifax, and in fact across the Maritimes, that has moved to put in place scent-reduction efforts.

First introduced in 1995 as an initiative of the Dalhousie Environmental Health and Safety Committee, the program encourages members of the university community as well as visitors to avoid use of scented personal care products. As background, the committee prepared a paper which in time came to stand as a university statement of its position on scents. It is part of a larger effort aimed at avoiding indoor air quality problems by selecting unscented, environmentally friendly custodial and maintenance products, eliminating tobacco smoke and similar activities.

Given the culture of the university, a decision was made to move in the direction of creating an awareness and education program rather than a formal policy which would inevitably raise questions about enforcement penalties and the like. In essence the program aimed to teach people that by using scented products they risked harming their professors, university staff, students and visitors. It has in fact turned out to be the strength of the program that it appeals to the best instincts in people to avoid harming others.

Since 1995 when the program was launched, the university has continued to grow and we now attract increasing proportion of students and employees from other parts of Canada and around the world. Few of these people have experienced indoor air quality crises on the scale of Camp Hill. The result is that there is an ongoing need to bring the program to the attention of the university and to educate people in the impact that scents and other indoor contaminants can have of some of our colleagues and students.

After almost 7 years of quite a successful operation there was a need to re-energize the program. So in 2002 the Environmental Health and Safety Committee and the Employment Equity Council (and the Offices which support them) co-operated to re-launch the program. The effort began with a pilot project which aimed to both educate and gather input from staff in our Killam Library. The project which resembled an electronic focus group was helpful in resolving some scent exposure problems in the library itself and generated a good deal of information upon which we created a new set of graphics and posters and web site as a means to communicate and inform the university community about the issue. A scent-free message in included in the Frosh Pac given annually to incoming students. Similar messages are found in the orientation materials given to new employees: university calendar, university phone directory, and Safety and Equity Office materials. Scent-free can be found on most university bulletin boards.

Another outcome of the re-launch was a bringing together of the promotion of the university’s smoking and scent programs. As both aim to protect people from potentially harmful exposures, it seem sensible to promote both the efforts under the same “WE SHARE THE AIR” slogan.

Our Housing and Conference folks bring many conference visitors to campus each year. They too provide prospective clients with information on our program (and the fact that they are also likely to encounter a scent-free culture elsewhere in the city).

The program continues to be very successful. Clearly the most important measure of success is whether people wear scented products to the university. Although it is an ongoing challenge to keep the program fresh and to compete with the scented product advertising campaigns visitors to our campus, and to the Halifax are generally, are struck by how successful these programs is. Although one continues to encounter the occasional person wearing a scent product on campus, there is no doubt that Halifax, and in particular Dalhousie, are by and large scent-free.

But from the perspective of someone who is sensitive to scents the fact that the university is largely scent free is not good enough. Encountering even occasionally someone wearing a scented product in a hall, an elevator, or a classroom can induce a bout of illness. When the need arises, staff of the Employment Equity and the Safety Offices are available to try to assist. In extreme cases senior members of the university are empowered to ask someone wearing a scented product to leave a university building. Signage alerting people to this fact was introduced in 2005.

Since putting the program in place we have heard from dozens - perhaps hundreds of people from across the continent and even Europe and organizations from across the region and from further afield have received permission to incorporate aspects of our program in their scent-free initiatives.

How to Handle 'Scent-Sensitive Situations'

Guidelines for Students, Staff, and Faculty

The following is designed to provide some guidelines for the handling of what is a sensitive issue for many people. How do you deal with complaints in the office, in the classroom, and in public spaces at the university?

For Employees and Supervisors

If you are an employee who suffers reactions to scented products and there is a scent in your surroundings that is causing you to have a reaction, you should do the following:

If you have sensitivities towards scents and start working in a new department, or you have recently developed an adverse reaction to fragrance:

If you are a supervisor and you have an employee in your department who suffers from health problems triggered by scents:

If the employee reports a problem to you:

If you are an employee who is wearing a scented product(s) and you are approached by another employee or your supervisor:

For Professors, Lecturers and Teaching Assistants

If you are a professor, lecturer or teaching assistant who suffers reactions to scented products and there is scent in your classroom that is causing you to have a reaction, you should do the following:

If you are a student having reactions to your roommate's/neighbor's scents in residence:

If you know the person well and feel comfortable with him or her, you could approach him or her directly. Explain what the problem is - what you think you are reacting to and explain what kind of reaction(s) the fragrance triggers.
Ask him or her to visit We Share The Air for more information.
Ask your roommate/neighbor to consider switching to unscented products.
If you feel that direct contact with the scent would worsen your reaction or if you don't feel comfortable approaching the person wearing the scent, tell your Resident Assistant and they will talk with him or her.
If this a serious problem that may require alternative arrangements, contact the Residence Life Manager in your residence.
If you're having a reaction to the scented products worn by your classmate(s):

If it's a fragrance worn by a particular classmate:

If you know the person well and feel comfortable, you could approach him or her directly. Explain what the problem is - what you think you are reacting to and explain what kind of reactions the fragrance triggers.
Ask her or him to visit the University's We Share The Air web site for educational information.
Ask your classmate if he or she would consider switching to unscented products.
If you feel that direct contact with the scent would worsen your reaction or if you don't feel comfortable approaching the person wearing the scent, approach your professor or the teaching assistant and ask that they speak to your classmates about the matter.
If the problem continues, seek help from the Advisor for Student Accessibility Services.
If you are a student who is wearing a scented product(s) and you are approached by another student or your professor:

For All Members of the Dalhousie Community

If you are having a reaction to a scented product on campus - Dalplex, the Rebecca Cohn Auditorium, the SUB:

If you are wearing a scented products and you are approached by someone who is chemically sensitive or someone acting on their behalf:

In every situation where you must confront someone about the scented products they are wearing, REMEMBER THAT EDUCATION IS THE KEY in this initiative. A lot of people don't know about Dalhousie's scent-free initiative. Sometimes there are cultural differences to take into account. The best approach in this situation is to: