Posted by Mirjam Held on April 3, 2017 in Research 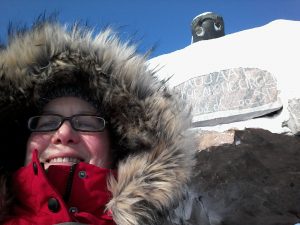 Between mid-February and the end of March Mirjam Held, the PhD student for the Arctic region, travelled to Nunavut for her fieldwork. Yes, it was cold, on average around -30°C (as it is a dry cold it is not as chilling), but most days were sunny and beautiful. While travelling in Nunavut can be challenging any time of year, Mirjam luckily only had to put up with minor hiccups. As part of her quest to explore the relationships between Inuit and Western knowledge and management systems in Nunavut fisheries governance, she interviewed people in Naujaat, Pond Inlet and Igloolik. 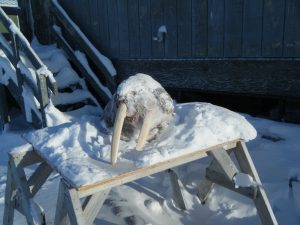 In Iqaluit, she had illuminating meetings with staff from Inuit Organizations as well as from the federal and the territorial governments, including the Fish-WIKS partners at the Government of Nunavut’s Fisheries and Sealing Division. In addition, she had the opportunity to attend a regular meeting of the Nunavut Wildlife Management Board (NWMB) and to catch up with Erin Keenan, the former Master student for the Arctic region, who is now working as a Wildlife Management Biologist at NWMB. In the three hamlets, Mirjam collaborated with the managers of the local Hunters and Trappers Organizations who assisted her in making contacts and finding interpreters. Each hamlet is a very unique community, but they were all very welcoming and eager to participate in Mirjam’s research. She considers it a great privilege to have been given the opportunity to talk to hunters old and young as well as female and male Elders. Their stories and insights, along with the stark beauty of the natural landscape but also the many issues facing the communities will stay with her forever. While Mirjam was busy interviewing people, Jade Owen, the Community Liaison Coordinator for Nunavut, made sure everybody involved in the research was adequately reimbursed for their time and knowledge. ᖁᔭᓐᓇᒦᒃ, thank you, to everybody who played a part in making this fieldwork adventure a great success. Mirjam is very pleased with the volume and depth of the data set collected and looks forward to further analyze it. This will take some time, as it will for all the impressions to fully sink in. 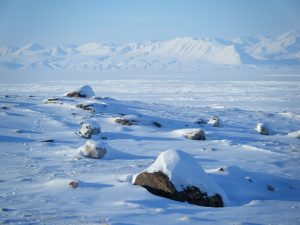