Posted by Mirjam Held on September 7, 2015 in Research

In May 2015, Fish-WIKS PI Dr. Lucia Fanning and PhD student Mirjam Held, who are also involved in the Transatlantic Ocean System Science and Technology (TOSST) program (www.tosst.org), had the wonderful opportunity to travel to Cabo Verde, a small volcanic archipelago 500 km off the West African coast. Their destination was Mindelo, the capital of the island of São Vicente, where the TOSST Summer School took place. TOSST is a graduate research school based at Dalhousie University which closely collaborates with a German sister school at Kiel University. Scholars from both universities as well as students from Cabo Verde and other West African countries took part in the summer school.

The theme of the summer school was The Seafloor and Marine Ecosystem Structures of Cabo Verde: Building Capacity for Science-Based Management and exposed students to lectures on integrated coastal management, the local marine ecosystem and related conservation measures, visits to the fish market and to fishing communities, as well as site visits to fish processing plants and the Cabo Verdean Atmospheric Observation (CVAO) station. The planned activities also included a field trip to the spectacular island of Fogo where the most recent eruption had occurred only a few months ago. Hands-on activities such as plankton sampling, fish sample analyses and the participation in an island-wide beach clean-up along with the exposure to Cabo Verdean culture through music, food, wine and lively discussions with local students and fishermen completed the program. 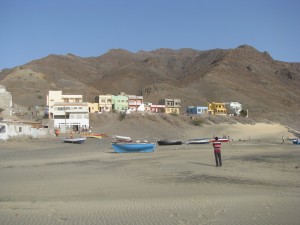 (São Pedro, one of the fishing communities on São Vicente - Photo: M. Held)

Through this wide variety of topics and activities the students were able to get a well-rounded picture of the coastal and oceanic issues affecting the country, including the state of the Cabo Verdean fisheries, the communities’ dependence on the marine resources and the scientific research that is undertaken on the island. This information was needed to complete the final project of the summer school, namely to prepare a proposal for a 10-year science plan on potential priorities for the new Ocean Science Centre Mindelo. This Centre is currently being built adjacent to the National Fisheries Development Institute (INDP) which kindly hosted the summer school. On the final day, five groups of students presented their proposals most of which included some form of community-based approach to research, increased fisheries monitoring efforts and opportunities for local economic development. 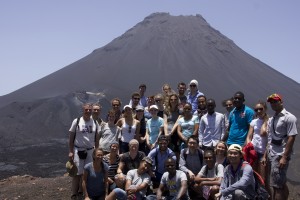 (The group of summer school participants in front of the Pico do Fogo. Photo: A.F. Dias Fonseco)

Earlier, all students also had the opportunity to present a poster about their own research at the Marine and Atmospheric Science Symposium which was held in Mindelo during the two week summer school. But that was by no means the only connection between the subtropical location of the TOSST Summer School and Mirjam’s Fish-WIKS research in the Canadian Arctic. While the Inuit in Nunavut hunt mainly large marine mammals and the Cabo Verdean fishermen catch ground fish and small pelagics, both fisheries are artisanal and characterized by the dichotomy of supporting livelihoods and fulfilling conservation goals. In both locations, bridging the science-policy gap is a major challenge as there is a lack of scientific data to guide and underpin management decisions and measures. Additionally, strengthening the role of the local resource users in decision making is a governance need in each region as is the growing involvement of external resource users. Regardless of location, monitoring both artisanal and industrial fisheries will be crucial in determining their sustainability, particularly since fishing is the largest single human impact on the marine ecosystem. 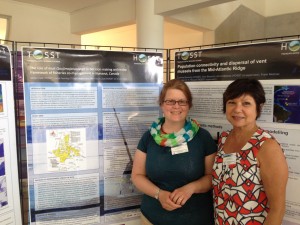