Home
Centre for the Study of Security and Development
Publications
Print Publications
Raids to Regulations: The Continuing Struggle to Disrupt Illicit Hawala Channels 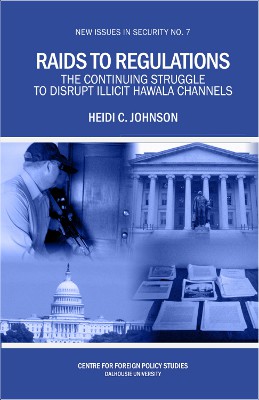 For years the world has struggled against terrorist threats and the extremism, collapsed states, dictatorships and political and economic turmoil associated with terrorism. An important focus of this struggle has been to identify how terrorist groups receive and move financial assets and how to intercept funds and cut off the financial lifelines. Following the 11 September 2001 attacks, investigators revealed that some of the assets used to finance these acts were channelled into the United States via an ancient financial practice called hawala – an Arabic word to indicate a transfer. An earlier Centre publication, Illicit Money and Informal Avenues, examined how international migration patterns have kept informal value exchange systems such as hawala in high demand, and how the methods by which hawala transactions are conducted make it an ideal way to move assets to and within locations where a formal financial sector has not yet developed.

In addition to its utility as a way to transfer remittances from migrant workers back to their families, during the past decade, investigators around the world have uncovered links between hawala and terrorism and between hawala and organized crime (particularly relating to drugs). These avenues create opportunities for terrorists and criminal groups to move money throughout the world without triggering the alarms that formal financial and banking sectors have been outfitted with for decades. This publication will revisit some of the changing political and economic variables affecting hawala, but will focus on examining how Western approaches to dealing with the flow of illicit money through these international channels have evolved since 9/11. It will identify what challenges and road blocks investigators continue to face in their efforts to follow the money, and draw on lessons learned in order to evaluate what avenues may be successful in the future.