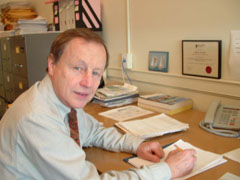 Gilbert Winham was one of the Centre’s founding scholars. During his long career at Dalhousie, he taught and researched on international political economy, and specialized in international trade policy. He was a Professor Emeritus of Political Science at Dalhousie, a fellow of the Royal Society of Canada, and a Woodrow Wilson Fellow (2001-2002). He served frequently on NAFTA dispute settlement panels. For more than twenty years, Dr. Winham ran very successful training courses on trade policy and negotiation, for government officials from developing countries, through the GATT/WTO in Geneva. He served as an on-site consultant in connection with the application for accession to the WTO of Jordan and the Kyrgyz Republic.