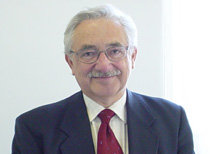 Denis Stairs has retired but he specialized in Canadian foreign and defence policy, Canada-U.S. Relations, and similar subjects. A former President of the Canadian Political Science Association, he was the founding Director of the CFPS, and served as Chair of the Department of Political Science from 1980 to 1985, and as Dalhousie's Vice-President (Academic & Research) from 1988 to 1993. He was a member of the Social Sciences and Humanities Research Council of Canada from 1981 to 1987 and of the Research Council of the Canadian Institute for Advanced Research from 1986 to 1997. He served on the Board of Directors of the Institute for Research on Public Policy from 1989 to 1997, and again from 1998 to 2006. Appointed to the Board of Visitors of the Canadian Forces College at its inception in 2002, he was its Chair from 2006 to 2009. In 2002 he became a member of the Advisory Council of the Canadian Defence and Foreign Affairs Institute. He was appointed a Senior Research Fellow at the Institute in 2008, and has been a member of the Board of Directors of the Pearson Peacekeeping Centre since 2007. He became a Fellow of the Royal Society of Canada in 1979, and was appointed an Officer of the Order of Canada in 2006.