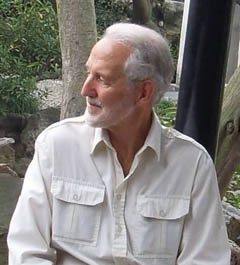 For more than two decades David Griffiths has been conducting independent applied research; writing, lecturing, facilitating and consulting on maritime aspects of international confidence, cooperation and mutual understanding. He has been engaged in a wide variety of public and private diplomacy initiatives, primarily in the Middle East, and in Central, South and East Asia. He has also taught at the university level on subjects ranging from ocean and coastal governance to emergency management.
Prior to his current career he was a Canadian naval officer whose service included 15 years at sea in ships and submarines, with staff appointments including personnel policy, project management, operational planning and doctrine development, for which he received a Maritime Commander’s Commendation in 1996. In 1992/93 he was seconded to the European Community Monitoring Mission during the wars in Yugoslavia, becoming head of the Coordination Centre responsible for operations in Eastern Herzegovina, Montenegro and the southern Dalmatian coast of Croatia. Between 1993 and 1996 his duties included serving as a naval advisor to the Middle East Peace Process.
David is a Research Fellow at the Centre for Foreign Policy Studies, a Senior Research Fellow with the International Ocean Institute (Canada), and an Honorary Fellow of the National Centre of Maritime Policy Research at Bahria University in Karachi, Pakistan. He also serves as Chair of the Board of Governors of the Atlantic School of Theology, Nova Scotia’s smallest university. He is a graduate of the Canadian Forces Command and Staff College and holds a Masters degree in Marine Management from Dalhousie University.

(2018) “Oceans of Opportunity: Maritime Dimensions of Security in the Arab World”. In Order from Ashes: New Foundations for Security in the Middle East, edited by Michael Wahid Hanna and Thanassis Cambanis, 233-259. New York: The Century Foundation, 2018. Available online at https://tcf.org/content/report/oceans-of-opportunity/?agreed=1

(2015) “Maritime Discourse, Dialogue and Deliberation in the 21st Century”. Proceedings of the Conference on Maritime Economy, Environment, and Security Cooperation: Bringing the West Pacific and the Indian Ocean Closer. Karachi: National Centre for Maritime Policy Research, 2015, 15-23.

(2007) "War and Other Disasters: A Holistic Approach to Security Strategy". Proceedings of the Conference on Maritime Threats and Opportunities in the 21st Century: a Global Perspective on the Indian Ocean. Karachi: National Centre of Maritime Policy Research, 2007, pp. 119-122.