Andrés Collart (BEng'14, MASc'16) is a Dalhousie engineering alumnus and entrepreneur. He is the co-founder and CEO of Trip Ninja, a travel technology company.

When undergraduate convocation rolled around, Andrés saw many of his classmates considering trips to Europe. He noticed that most people didn’t care about the order of the places they visited, they just wanted to choose where they went. This was where the idea for Trip Ninja began. It was then that Andrés realized he could find a solution for what his peers were experiencing and optimize trip booking from an engineering perspective.

Andrés and co-founder Brett Zeigler (BEng'14) got together and worked to figured out how to optimize the best order of flights for the cheapest price: “It used to take seven and a half minutes to run the whole program, now it takes 20 seconds.”

Beyond the engineering, Andrés had to immerse himself into learning the industry, especially how flights were commercialized. Soon after that, Andrés said, “We learned that what we were doing was part of solving that problem. We were also solving a somewhat simpler problem around split ticketing.” In discovering that they could solve two needs, they went about commercializing both products. The unplanned solution ended up having a broader impact than the original idea, with over 42,000 travellers using that technology.

“This has been interesting to go through,” said Andrés, “you think that this is the problem that you're out to solve. You solve that and then they're like, Oh no, I'd like you to solve a slightly simpler problem because we can use that more broadly.” 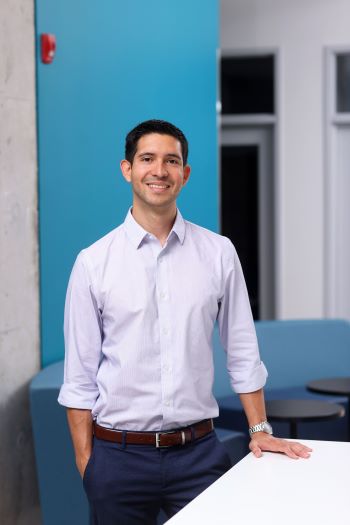 “We originally developed the technology during evenings and weekends, starting in 2014. And then, I think it was 2017, I quit my job. Shortly thereafter, Brett quit his job. We started raising some capital, put together a small team, and we’ve grown since then… until the pandemic,” says Andrés when reflecting on the company’s path.

The travel industry was acutely impacted by the pandemic: “95% of travel was gone, almost overnight” shared Andrés.

Trip Ninja entered the pandemic with around ten employees. “It was tough to be able to navigate that. With the burden of ‘I’ve hired these people and I’m responsible for them.’” With this challenge, Andrés worked hard toward retaining his staff, “I didn’t want to lay off my staff due to the pandemic. We were able to keep them employed throughout the pandemic.”

It was during the pandemic that Trip Ninja was acquired by WebJet. In rising and responding to this challenge, Andrés shared, “I'm proud of being able to retain the people that we hired and being able to figure out a path forward that didn't involve mass layoffs.”

Through the acquisition of Trip Ninja, Andrés has stayed on with the company as CEO. Together with co-founder Brett Zeigler, they continue to move Trip Ninja forward: “We are continuing to grow quite rapidly again. Right now, we have five or six open job postings.”

“It’s honestly a fun challenge around building Trip Ninja back up to where it was, and also with the backing of Webjet, taking it forward into that next phase,” shared Andrés, who now enjoys spending more time on the project engineering side. Previously over a third of his time was dedicated to fundraising efforts.

From advice given to advice-giving

With this leadership role in a growing company, Andrés Collart enjoys empowering others to build great products. From his time at Dalhousie, Andrés remembers a standout professor, Dr. Elden Gunn, who taught by guiding him instead of giving him the solution. Andrés puts this method to work now, where he guides his staff forward. He says, “I give them the tools and I provide the connections to industry players and say ‘this is the product you have to build, and this is how you put them together.’ Then I can guide them and provide a level of support throughout the work.”

For people considering entrepreneurship, Andrés' advice is to look at what options you have available.

“There's the ‘standard’ path around, going off and getting a job and having a great career on that front. Then there's starting a business and doing that full-time. But in the middle, there's a whole gradient of possibilities that you can do as well. So, it's not binary.”

A decision like the latter allowed for a smooth transition for Andrés, who started the tech for Trip Ninja in 2014 and did not leave his career to pursue it full time until 2017.

Andrés Collart is a big believer of going all-in for something you are passionate about, whether or not it's from the moment that you have the idea.