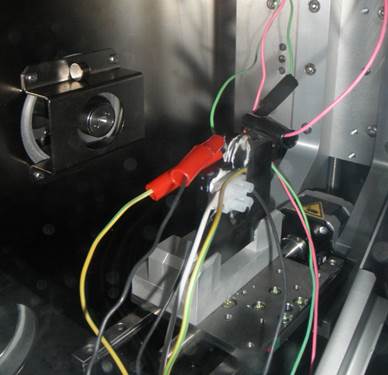 Small-angle X-ray scattering (SAXS) data is taken of coin cells with nanostructured negative electrode materials such as SnCoC. Coin cells are made with Beryllium (transparent to X-rays) windows and are connected via an external cable to chargers in the main lab. X-ray information is collected as these in-situ cells charge and discharge, and the result is modeled and combined with voltage data to give a quantitative look into the behaviour of the nanostructured material upon lithiation and delithiation.

Periodic SAXS data of two lithiation-delithiation cycles. The pattern never returns to that of the fresh material.

Li-ion batteries are now used in a wide variety of applications. However, energy density (amount of energy stored per unit volume) still needs to be improved. As such Si alloy materials are of interest for their high volumetric capacity (≈3 times that of the widely used graphite material).

In order to understand this fade mechanism cells containing a negative electrodes consisting of a blend of Si alloy and graphite and a positive electrode consisting LiCoO2 were filled with the same electrolyte and cycled for various amount of time and various rates (currents of various amplitudes). The electrolyte used contained 10 wt% fluoroethylene carbonate (FEC), an additive that has been widely reported as extending lifetime of cells containing Si-based negative electrodes.

The design of Si-containing cells with long lifetime then needs electrolyte that reduces the consumption rate of FEC or uses another passivating agent, as well as uses a combination of electrolyte composition and active material design that reduces the amount of cracks in the protective layer generated by the expansion of the Si.