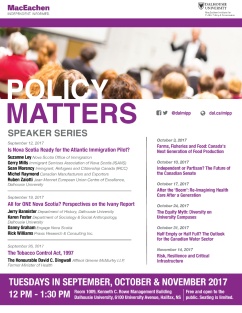 Despite years of employment equity policies and an increasingly diverse population, universities across Canada do not reflect the diversity of the broader population. This discussion examines how and why underrepresentation of ‘racialized faculty’ occurs.

Note: There were some important comments made after the panel concluded and unfortunately they were not captured on the live stream.

From the Canadian Press: “'The myth that you share is that Dalhousie is doing a good job about equity and inclusion,' said Ifo Ikede, a former computer engineering and computer science student at the Halifax university. 'We’re swimming in a sea of white supremacy,' he said. 'The only people who are free to speak are white men and women.' . . . The panelists responded to his comments before ending the lecture.'"

We apologize for the time constraints and regret not capturing these comments in the video.