Social Responses to the 'Big Lift' 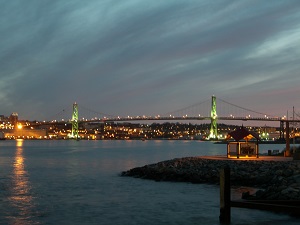 Free and open to the public

Hosted jointly by the MacEachen Institute for Public Policy and Governance and the School of Public Administration at Dalhousie University.

The panel will feature research from a team of local and international scholars about the impact of bridge closures to traffic flow, the public’s and media’s use of social media in response to the re-decking, and the results of two large surveys of public attitudes towards the bridge re-decking.

Background
Up to 48,000 vehicles, 700 cyclists and 750 pedestrians cross Halifax’s Macdonald Bridge every day.  In March 2015, Halifax Harbour Bridges (HHB) began an 18-month, $150-million project to re-deck the suspended spans of the Macdonald Bridge. This significant technical achievement has been dubbed The Big Lift, and is only the second time in history the suspended spans of a bridge have been replaced at night and in use during the day. The Social Sciences and Humanities Research Council (SSHRC) has provided support to this team of scholars to study different community aspects of the project.  The panel will report some of its findings to date.