The No. 1 speech rehab centre is right here in Canada 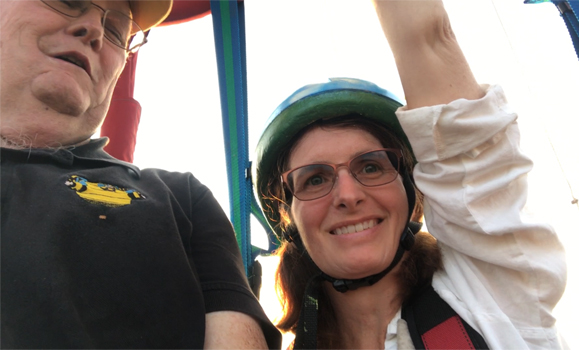 Participating in InteRACT, an intensive 4.5-week aphasia treatment program, was “the best decision we ever made,” say husband–wife team Bill Whelan and Sandra Rolfe.

Sandra used to squeeze in a fitness class before starting her days’ work in HR for the Canadian Broadcasting Corporation (CBC) at 7:30 a.m. Afterward, if the weather was right, she and Bill would go hot-air ballooning—Sandra holds 57 Canadian records in the sport.

On November 1, 2015, Sandra, 51, had a stroke. She completely lost her speech for 52 days, spent seven months in hospital, and was all but confined to a wheelchair for over a year.

Outpatient speech therapy and physiotherapy brought frustratingly slow improvements. They wanted something more, beyond what was available near their hometown of Vankleek Hill, Ontario, Canada. “The more intensive therapy you have, the better it works—for physio and speech,” says Bill. “Repetition, repetition, repetition.”

InteRACT, where each weekday brought four hours of one-on-one therapy, group sessions and more, was perfect. “Every day was chock-full of training and activities. Every time she went to either physio or speech therapy, she would gain something … and every small improvement is a big event.”

Bill watched his wife thrive. “While we were at InteRACT, Sandra got away from using just one or two words and started using more words in a sentence … she was using some incredibly long, long sentences.”

The intensive aphasia therapy was miles above any other therapy they’d tried. “I gotta tell you, the No. 1 speech rehab centre is right here in Canada,” says Bill. “It works.”

These days, Sandra relies less and less on her wheelchair. She takes care of the family’s finances again and, while she’s not yet back at work, she is back in the hot-air balloon.

“My princess is coming back,” says Bill. “We’re onward and upward.”