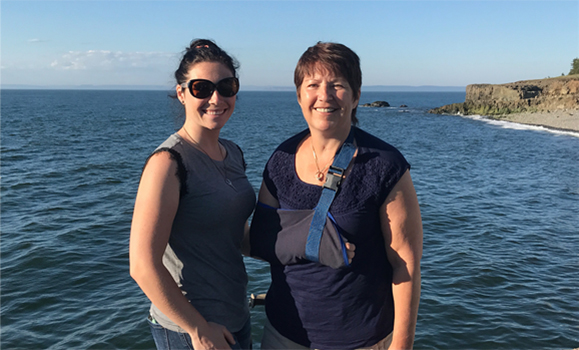 Lindsay Martel found InteRACT out of near-desperation. “I was just really frustrated with how my mother wasn’t able to communicate and it was making me angry.”

Lindsay’s mother Roxanne, a teacher and guidance counsellor from Battleford, Saskatchewan, Canada, loved to swim, walk and visit friends—until her stroke on New Year’s Eve 2014. The resulting aphasia changed everything for the 51 year old.

“She had thoughts in her head but couldn’t get them out,” says Lindsay. “And she would always get stuck on a certain word and not get past it.” Roxanne could no longer work or enjoy spending time with friends and family.

Roxanne attended two to three speech therapy sessions a week, but Lindsay wondered if more therapy would lead to better results. After researching aphasia therapy options, she settled on InteRACT, a 4.5-week program based in Halifax, Nova Scotia, Canada.

She liked its intensity—four hours of one-on-one therapy a day, for starters—as well as the fact she could attend with her mother. InteRACT’s international reputation was just one more selling point. “InteRACT has a really good name,” Lindsay says. “And they lived up to it.”

“You guys do phenomenal work,” Lindsay continues. “How you have the five different types of therapy, and how you tie it all into real life by taking participants out into the community to make them do things like ordering at a restaurant or buying something at a store.”

Not surprisingly, Roxanne’s favourite parts of the InteRACT program were the evening group activities, like eating at a restaurant. “Learning to order on the phone was another big highlight for her,” says Lindsay. “A highlight for me was when she learned how to dial 911 and report her address because I didn’t know that she hadn’t been able to do that.”

Roxanne’s reading and speaking abilities improved throughout her session, as did her confidence—but there was more.

“She found activities that she could actually do,” Lindsay says. “Like how we went out on bikes, just exploring the city. She never would have gone and done that had it not been for InteRACT because she wouldn’t have thought she was capable.”

Overall, InteRACT was “super welcoming and it was like a big family, including the interns and the speech pathologists and all the participants and their caregivers,” says Lindsay. “You guys really create a good community.”