I saw his confidence just skyrocket 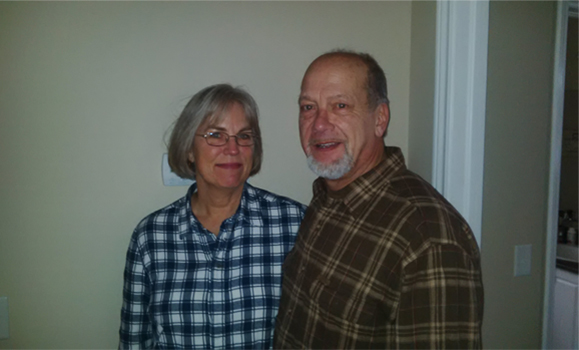 At parties, Mike Guindon, 68, was always at the centre, always the storyteller. Until his April 2015 stroke.

“My comprehension was devastated. The speaking was not good,” he remembers. His independence went too—he was no longer comfortable being alone in his home in Bath, Ontario, Canada.

Mike heard about InteRACT, an intensive aphasia therapy program on Canada’s east coast, from his speech pathologist. Immediately, he was determined to go—and his enthusiasm never waned during the 4.5 weeks of the program.

Driven to improve, he ended each day looking forward to the next. He saw the InteRACT team was fully on his side; he found confidence in “knowing how the interns and everybody worked together.”

His wife, Melanie Myers, noticed something else. “One of the key things is that InteRACT and the staff give you realistic hope … that you can do something. You can improve. You can communicate in some fashion.

“The speech therapy itself was fantastic, but it was the attitude everyone had that made the difference.”

That difference was so impressive that Mike and Melanie returned for a second full session the next year and then, the next year, an InteRACT refresher program.

“Mike had a huge leap forward during and after that week, and that was when I saw his confidence just skyrocket,” says Melanie.

He wasn’t alone in that. “We make a great team,” Melanie adds. “Without the support from InteRACT, I would not have the confidence, or the knowledge of what to be doing, to be able to continue after we came home.”

Mike has returned to working 35 hours a week. After a couple of years of sitting in a corner during family gatherings, he’s back at the table and joining in.

“It’s InteRACT that has given Mike back the life that he was enjoying before.”