A mom's experience in Halifax

I recently read the following quote: “No one tells you the hardest part of motherhood is when your kids grow up.” I’ve found that to be a painfully true statement. It has proven to be one of the most unexpected surprises in my parenting journey.

As a teen mom living in poverty, I wished many years away. I rushed through special times and special stages in hopes of finding freedom again. I longed for quiet days, free from responsibility and the demands of parenting. 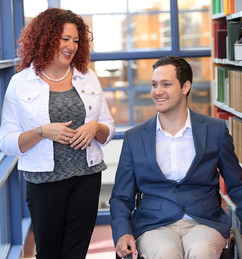 In raising Michael, we quickly implemented concepts such as responsibility, financial management and education. We talked about honesty, integrity and achievement. We tackled problem solving, critical thinking, goal setting and time management. Our collective goal was independence for all.

I remember when Michael was about four and he insisted that I not lick my thumb to wipe dirt from his cheek. He had his first meeting with the bank at about six.  That meeting was over an hour long. At age eight, Michael began saving for university and soon decided I was no longer needed to attend his doctor’s appointments.

In our family, each step toward independence was encouraged and celebrated. Michael was always cooperative as a child and as a teen, as he was eager to become a man and manage his own affairs.

On Michael’s 16 birthday, he started his first job, which he had secured at 15.  He had his driver’s licence, straight A’s, a solid social network, was involved in sports and volunteered in the community. He had impeccable judgement, great friendships, a well-laid plan and our complete trust.

On the evening of February 15, 2008, Mike Sr. and I discussed how well established Michael was and how comfortable we were with his decisions and development. On a Friday night, Michael was home early to rest-up for Saturday’s snowboarding trip with friends. We were so pleased. Off he went the next morning .

On February 16, 2008 the ultimate test of our family’s strength and fortitude began to unfold when Michael was injured on the ski hill. We received a call to meet Michael at the Truro hospital, because “there had been an accident.” We were advised not to worry as Michael “was in good cheer.”

Michael knew in an instant his life had changed forever. He was under no illusion that there was nothing to worry about. He knew he had been paralyzed, yet remained “in good cheer.”

As Michael lay on the gurney in a neck brace, unable to move, he looked up with his wide eyes and said, “If you guys have anything you want to do you should do it. This could happen to anyone.” That sentence has become our family’s mission statement and I’m confident it is Michael’s personal mantra.

From that day to this one, Michael has not missed a beat, a milestone, or an opportunity. Michael continues to achieve excellent grades, establish lofty goals, build beautiful friendships and enjoy all the things life has to offer.

Michael has charged into the world of academia, taking Saint Mary’s, and now Dalhousie, by storm. He has been active in his school, has built a solid network and still makes time to call his Mom.

Now, as Michael pursues his law degree and his MBA, he has the same determination as that little four-year-old who insisted I not lick my thumb to wipe his cheek. Michael continues to be in “good cheer”—great cheer, in fact!

Michael began his journey toward independence when he was four. However, for me, it’s as though my journey began at 40. As I move ever so gently through this “go-don’t-go, stay-don’t-stay, happy-but-sad” phase of parenting, I have come to learn that Michael now belongs to a larger world. I work to accept he is no longer my little boy, while enjoying the fact that he will always be my little boy.

The only real difference over the last 25 years is that Michael is no longer only lighting up my world. He is my life, my love, my reason for being—and Michael’s light shines much brighter than I could have ever imagined.