Marking a milestone year at the MacEachen Institute

Allan MacEachen, right, poses with a child in Mabou, Cape Breton in this spring 1983 photo. (Contributed by Alfred LeBlanc)

The MacEachen Institute for Public Policy and Governance launched at Dalhousie five years ago with the aim of energizing and informing progressive public policy education, ideas and debates in Canada and abroad — inspired at its core by the values of the late Honourable Allan J. MacEachen.

Now, as the institute looks back on its first half decade and marks the 100th anniversary of MacEachen’s birth today (July 6), it does so with a great deal of success in living up to its mission of encouraging greater citizen engagement. To date, the institute has hosted more than 100 panel and roundtable events, drawing over 8,500 attendees.

“We have been gratified by the community response,” says Kevin Quigley, scholarly director of the MacEachen Institute. “We started our public policy series, Policy Matters, in a graduate class and opened it up to the public. By the second year, we had to bring extra chairs into the classroom to meet community demand and by the third year, we had to move into the biggest classroom in the Rowe Building: it was chock-a-block.”

Dr. Quigley says the institute’s success has also been reflected in its ability to help shape debates on local and national issues.

“Our goal from the start has been to connect local issues with national policy debates and connect national policy debates with local issues,” he says. “We are also featured regularly in the local and national press. It all speaks to the appetite on campus and across the community for good public policy discussion, on climate change to reconciliation, from cyber security during the federal election to paying for recreational infrastructure.”

A better life for all Canadians

The MacEachen Institute was established in the name of Allan J. MacEachen, one of Canada’s greatest parliamentarians who arose from humble beginnings in Inverness, Cape Breton.

He was born on July 6, 1921, his father a coal miner and his mother a homemaker. He grew up during the great depression and lost siblings to an epidemic, informing what would become his life’s work to create a better life for all Canadians. 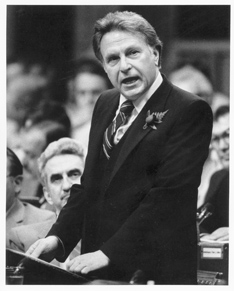 MacEachen was first elected to office in 1953 and right away proved to be a force in Canadian politics. He led the charge in designing social programs such as the labour code, minimum wage standards, the Health Resources Fund, the Canada Assistance Plan, and the Old Age Security Act.

Right, MacEachen giving the budget speech in 1982 as minister of finance. (Photo contributed by Robert Patillo)

But his most notable achievement, perhaps, was championing the Medical Care Act in 1966 as Minister of National Health and Welfare.

MacEachen brought Medicare through a challenging environment of both strident opposition and support.

“Mr. MacEachen had a passionate and long-standing commitment to a ‘universal, prepaid government sponsored scheme’ available to all Canadians regardless of their ability to pay,” says Dr. Joanne Langley, a professor of pediatrics and community health and epidemiology at Dalhousie.

“His unique role in ensuring citizens have access to Medicare is probably not known to many, but it is a story of determination, patience and perseverance. His service led to a universal comprehensive health insurance program that Canadians see as reflecting our values of equality and fairness.”

A renewed focus for MacEachen's legacy

When the COVID-19 pandemic hit in early 2020, questions surrounding the adequacy of healthcare in Canada came into national focus.

MacEachen had a vision to provide equal and affordable care to all Canadians. The task now is to consider what that means in the current context, 55 years after the Medical Care Act was introduced.

On July 6, 2021, at 4 pm ADT, the MacEachen Institute is hosting a special event in commemoration of the legacy of Allan J. MacEachen.

The event will feature an address by Dr. Langley followed by panel discussion featuring the Honourable Anne McLellan, Darrell Dexter, Jason Shannon, Dr. Samir Sinha, and Dr. Gaynor Watson-Creed. The 1.5-hour event will close with a commemorative video and reflections on the legacy of Allan MacEachen by Dr. Thomas Axworthy.

Click here to register and visit dal.ca/mipp more for information.