Photo by National Geographic Explorer in Residence Enric Sala, taken in the waters of Coasta Rica while on expedition in 2019.

An international team of researchers has developed a comprehensive plan that would safeguard more than 80 per cent of global habitats for endangered marine species, while also increasing fishing catches by more than eight million metric tons and curbing carbon emissions by up to 1 billion tonnes per year.

The study is seen as a major milestone in achieving comprehensive ocean protection of 30 per cent of marine area by 2030, as recently committed to by Canada and other countries. Boris Worm, a Killam Research professor at Dalhousie, co-authored the study, published in the journal Nature, and leads a dedicated research project on protected-area planning at the Ocean Frontier Institute.

“The ocean covers 70 per cent of the earth yet, until now, its importance for solving some of the most pressing challenges of our time has been overlooked,” said Dr. Worm.

“Smart ocean protection can help to provide natural climate solutions, make seafood more abundant and safeguard imperiled marine species – all at the same time. The benefits are clear. If we want to solve the three most pressing challenges of our century — biodiversity loss, climate change and food shortages — we must protect our ocean.”

“The ocean floor is the world’s largest carbon storehouse. If we’re to succeed in stopping global warming, we must work to leave the carbon-rich seabed undisturbed,” said co-author Trisha Atwood of Utah State University.

Ocean life has been declining worldwide because of overfishing, habitat destruction and climate change. However, only seven per cent of the ocean is currently under some kind of protection, says Enric Sala, explorer in residence at the National Geographic Society and lead author of the study, Protecting the global ocean for biodiversity, food and climate.

“In this study, we’ve pioneered a new way to identify the places that, if strongly protected, will boost food production and safeguard marine life, all while reducing carbon emissions,” Dr. Sala said.

The analysis shows that 30 per cent is the minimum amount of ocean that the world must protect in order to provide multiple benefits to humanity.

To identify the priority areas, the authors — leading marine biologists, climate experts and economists — analyzed the world’s unprotected ocean waters based on the degree to which they are threatened by human activities that can be reduced by marine protected areas (MPAs).

They then developed an algorithm to identify those areas where increased protection would deliver the greatest benefits across the three complementary goals of biodiversity protection, seafood production and climate mitigation. They mapped these locations to create a practical “blueprint” that governments can use to implement their commitments to protect nature, and unlock significant economic benefits at the same time. 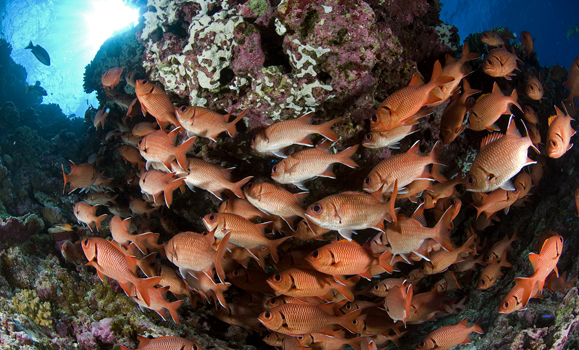 Photo by National Geographic Explorer in Residence Enric Sala, taken in the waters near Southern Line Islands off the coast of Kirbati in 2009.

The authors found that the priority locations are distributed throughout the ocean, with the vast majority within the 200-mile Exclusive Economic Zones of coastal nations. Priority areas within Canada’s national waters include the Fundian Channel south of Nova Scotia, the Southern Grand Banks, and the Central Coast of British Columbia, among others.

Other protection targets are located in the high seas — those waters governed by international law. These include the Mid-Atlantic Ridge (a massive underwater mountain range), the Mascarene Plateau in the Indian Ocean, the Nazca Ridge off the west coast of South America and the Southwest Indian Ridge, between Africa and Antarctica.

One notable priority for conservation is Antarctica, which currently has little protection but is projected to host many vulnerable species in the future due to climate change.

The study finds that smartly placed MPAs that ban fishing would actually boost the production of fish at a time when supplies of wild-caught fish are dwindling and demand is rising. In doing so, the authors refute a long-held view that ocean protection harms fisheries.

“This research provides the bedrock upon which decisions-makers can map and plan interactions with the ocean to deliver multiple benefits for people and biodiversity,” says Dr. Jennifer McGowan of Yale University.

“Our research provides evidence that the time has come to retire the narrative that conservation is at odds with economic prosperity.”

The study follows announcements by Canada and other countries recent to invest into a sustainable blue economy, while increasing ocean protection measures. It will also inform the upcoming 15th Conference of the Parties to the United Nations Convention on Biological Diversity in May in Kunming, China. Representatives of 190 countries will finalize an agreement to end the world’s biodiversity crisis, with the goal of protecting 30 per cent of the planet’s land and ocean by 2030.