An example of one of the anti-Semitic stickers placed on a garbage can in Halifax recently. (AJC photo) 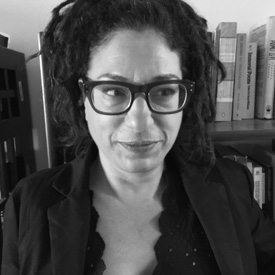 About the author: Dr. Lissa Skitolsky is the current Simon and Riva Spatz Visiting Chair in Jewish Studies at Dalhousie University. The chair, currently hosted in the Department of Philosophy, brings distinguished scholars from around the globe to share their expertise and perspectives with students and faculty at Dalhousie University and members of the broader Halifax community.

During the month of September 2020, when many Jewish residents were observing the High Holidays — our holiest days of observance — unknown individuals were placing anti-Semitic adhesive stickers on trash cans and poles around Halifax that referenced traditional stereotypes and conspiracy theories about Jews in relation to the global pandemic.

Representatives of various community groups including the Atlantic Jewish Council, Dalhousie University and others have been working with local police to investigate reports of these stickers. Although these recent stickers make specific reference to COVID-19, there is a recurrent pattern of increased incidents of anti-Semitic graffiti and/or stickers around Halifax every September in an apparent effort to stoke anti-Jewish sentiment while we gather to observe our most sacred rituals of repentance and renewal. The stickers serve as a reminder of the importance of Dalhousie’s commitment to condemn and oppose hate speech and discrimination against minority groups in our community.

As the 2020-2021 Simon and Riva Spatz Visiting Chair of Jewish Studies at Dalhousie, I can offer resources for residents to understand the context and the harm of these stickers, as well as facilitate dialogues between residents, activists, faculty and staff about how these occasions of hate can become occasions for solidarity and enhanced community. There are also different Jewish organizations with branches in Halifax that can provide essential resources to better understand Jewish culture and the threat of anti-Semitic beliefs.

The Atlantic Jewish Council (AJC), for example, has served to build a sense of Jewish community and raise the visibility of Jewish culture in the Atlantic Canadian provinces since 1975. The AJC’s statement condemns these stickers as a “malicious blood libel” against Jews — a term that references centuries of anti-Semitic associations between Jewish people and plagues. Based originally on a medieval European anti-Semitic belief that Jews used the blood of Christian children as part of their religious rituals, the charge of blood libel has been invoked throughout history including as part of Nazi propaganda in the 1930s. The AJC specified that the stickers around Halifax invoke an association between Jews (represented by the Star of David) and the current global pandemic that reinforces a stereotype that has historically led to and rationalized the persecution of Jews.

“While some might see these stickers as somewhat trivial or harmless, as a Jewish community,” says AJC Executive Director Naomi Rosenfeld, “we know that the writing on these stickers harkens back to malicious anti-Semitic tropes of the past. We also know how dangerous anti-Semitism can be if left unanswered.” She also reports that, sadly, this is not the first instance of anti-Jewish sentiment or vandalism related to COVID-19 that has happened in Halifax this year.

The grass-roots organization Independent Jewish Voices Canada (IJV), founded in 2008 with chapters across Canada, issued a press release to condemn the proliferation of these stickers around Halifax and their use of conspiracy theories to ferment hatred toward vulnerable groups.

“The stickers appear to be similar and may be related,” they write, noting the appearance of stickers related to other groups in addition to Jews. “The message seems to be that both the pandemic itself and the measures taken to reduce its spread are part of a secret scheme to rob individuals of their freedom.”

In its press release, IJV asserts that the proper response to the threat posed by these stickers is to foster solidarity between and with all groups who are targeted by white supremacy, even as we can and must draw attention to how the stickers include the Jewish Star of David to reinforce a specifically anti-Semitic view about the Jewish people and the global pandemic. As explained in their statement: “One of the stickers targets Jewish people. As Jews, we are, of course, concerned. But it is essential to recognize that anti-Semitism is not an exceptional form of bigotry. People who hate, discriminate and/or attack Jews can, and also do, hate, discriminate and/or attack other vulnerable groups.”

Dalhousie joins the AJC and the IJV in calling on residents to report these stickers to the Halifax Regional Police so that they can monitor their spread and take measures to stop them. If residents come across any stickers or other anti-Semitic posters, please dial the HRP non-emergency number at 902-490-5020.

As an American, I am grateful to be residing in Halifax, but seeing these hate-stickers around town also reminds me that I cannot escape the local signs of discrimination that emerge from global systems of oppression that target groups on the basis of religion, race, ethnicity, gender, class, sex and ability.

Part of what I can do to help, in my role as the Spatz Visiting Chair in Jewish Studies, is to foster important dialogues. I will be presenting the 2020 Spatz Lecture — virtually this year — on the topic of, “The Academic Sensibility of Genocide and Our Post-Racial Sensibility of Anti-Black Violence” on December 4, co-sponsored with the Dalhousie Philosophy Department as part of its Colloquium series. In the Winter Term, I will be teaching a course on Jewish Philosophy and organizing the inaugural Irving Glovin public lecture by Dr. Lewis Gordon on “Africana Jewish Studies.”

In these trying and often isolating times it is especially important to find ways to connect across differences and find solace in community, and as the Spatz Visiting Chair, I am thrilled to be able to connect with students and residents and local organizations about the significance of Jewish life and practice in the past and present. Please do not hesitate to email me at lissa.skitolsky@dal.ca if I can answer any questions or provide any additional information about the upcoming programs on Jewish history and culture.