It is well known that salmon provides a range of valuable nutrients, including omega-3 fatty acids and protein. But it can be confusing for consumers to know which species offers the highest level of nutrition when they are faced with several different types of salmon at the grocery store.

There are also mixed messages when it comes to farmed salmon, with some people believing it may contain contaminants and is not as nutritious as wild-caught fish.

Consumers can’t look to labels for clarity since nutritional information is not required on seafood packaging in Canada and the United States. 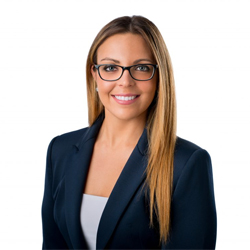 Stefanie Colombo (pictured), an assistant professor of Aquaculture at Dalhousie University’s Agriculture Campus, wanted to shed some light on the murky area by exploring the nutritional differences between salmon. Her research, published recently in the Journal of Agriculture and Food Research, produced some surprising findings she hopes may dispel misunderstandings about farmed salmon.

“I get a lot of questions from people I meet about farmed salmon and many people have the idea that it's not good for you, that it's full of fat and contaminants,” says Dr. Colombo, who also holds the Canada Research Chair in Aquaculture Nutrition. “I knew these were misconceptions, but I wanted to know how it compared to the other types of salmon that were out there.

“I was surprised by a few things. It's really the species of salmon that makes the biggest difference in nutritional quality — not whether it was farm raised or wild caught, or whether it's certified organic or environmentally certified. For example, there was a big difference in the wild salmon we looked at — between Sockeye, Chinook and Pacific.

The results did clearly show that salmon types are different.”

The team brought all the samples back to the Dal Agricultural Campus in Truro, processed the fillets and did various nutritional analyses, as well as for mercury. Dr. Colombo tested the different salmon species that were either wild, farmed, organic, non-organic, environmental certified, and non-environmental certified.

Dr. Colombo found that the more expensive wild Sockeye, which can be $31.50/lb, and wild Chinook had the most nutrient-dense and highest omega-3 content. But she also discovered that farmed Atlantic salmon, which costs about $12.50/lb, had the lowest mercury content, had a high nutrient density, is more affordable and available on both of Canada’s coasts.

“There's actually no other study out there that has done this for Canadian salmon,” she says. “There have been studies that focus on the contaminants, but they are several years old and things have changed in the environment and in aquaculture. So, it was an exciting opportunity to do an investigation!”

Dr. Colombo says the material can be useful for consumers searching for nutrition information about salmon, while clearing up confusion about distinctions between wild and farmed fish.

Based on these results, Sockeye and Chinook can be consumed less frequently for the same nutritional value. However, they are expensive and there are limits on sustainable catch levels. But if you enjoy eating salmon more frequently, Dr. Colombo says farmed Atlantic is a great option for its nutritional value, cost, availability and low mercury.

Aquaculture supplies around 50 per cent of the world’s fish for human consumption, with Canada being the fourth largest producer of salmon in the world, behind Norway, Chile and the United Kingdom. The volume of farmed Atlantic salmon has increased by 800 per cent since 1990, with 72 per cent of salmon we eat today being farm-raised, according to the paper.

The research, which was funded by a Discovery Grant from the Natural Science and Engineering Research Council of Canada (NSERC), may also provide policy makers with important information on the nutritional value and possible future labelling for a fish that is linked to improved cardiovascular and neurological health, the development of visual capabilities and brain development in fetuses, and has anti-inflammatory properties.

“The situation with regards to traceability and labeling is evolving, and I think we'll see more labeling for agricultural products in the future — this paper can be helpful for policy makers to review the current data on the vast differences in nutritional content of salmon,” says Dr. Colombo.