Quieter seas: Measuring noise reduction in the ocean during this pandemic

A quieter environment for whales and marine life

David Barclay, assistant professor, Department of Oceanography in the Faculty of Science on the docks of the Woods Hole Oceanographic Institution. (Provided photos)

For decades, it has been assumed that a quieter ocean could help take the Salish Sea’s southern resident killer whales off the endangered species list. But researchers lacked enough data to test this theory — until now.

When COVID19 put the world on lockdown, David Barclay, an assistant professor in the Department of Oceanography, Faculty of Science, and researchers in his lab seized an opportunity to explore how much change has occurred in the underwater noise environment due to the pandemic.

“Oceans Network Canada operate an amazing network of underwater observatories that provide a tool to characterize the soundscape of B.C.’s coastal waters,” says Dr. Barclay. “These hydrophones allow us to analyze everything from the force of winter storms to the presence of killer whales — in near real-time.”

The paper, which was recently accepted for publication in the Journal of the Acoustical Society of America, found a measurable reduction in the amount of low-frequency sound 300 km off the west coast of Vancouver Island, near a major shipping route for container traffic between western Canada and the Pacific Northwest of the U.S and Asia. They found the same significant reduction in the Georgia Strait between Vancouver Island and mainland B.C., North America’s largest export terminal.

The reduction in underwater noise pollution due to COVID19 may be good news for whales and other sea mammals.

Between January and April of this year, an offshore hydrophone station west of Vancouver Island recorded a 16 per cent decrease in noise power — or 1.5 decibels — compared to the same time last year.

“It’s a small but significant reduction and may hint at even larger decreases in the coming months,” says Dr. Barclay. 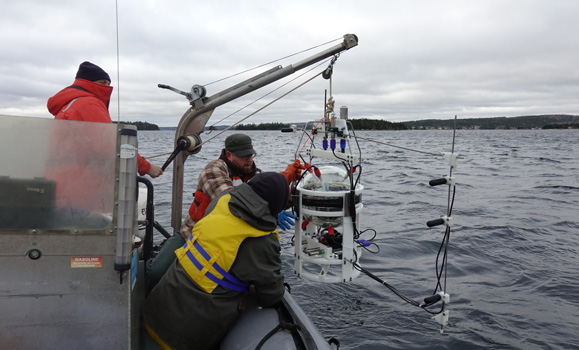 In the busy Strait of Georgia — the body of water between Vancouver Island and the B.C. mainland — Dr. Barclay looked at the change in noise week over week, noting that not only was the ocean getting quieter, it was getting quieter at a faster rate. By April, the noise power being put into the water by ships’ engines and propulsion systems had reduced by almost half, or more than 5 decibels.

It’s not fully known what effect that might have on marine life, but a 2012 study showed that North Atlantic right whales appear less stressed when noise levels in the ocean are reduced, as was the case in the wake of the September 11 terrorist attacks in the U.S., when most ships were ordered into ports. Ocean noise is also thought to effect how whales communicate, behave and migrate. The results effect of a quieter ocean may lead to healthier marine mammal populations.

“Free from the distraction and stress we cause, hunting would become easier, mating more convenient, and wayfinding more obvious. Sound is for some whales and marine mammals what sight is for humans,” Dr. Barclay emphasizes.

The impact on animals and marine life

Dugald Thomson, a Major in the Royal Canadian Air Force and a PhD student in Dr. Barclay’s lab, noted that economic data revealed that the port had seen a 20 per cent decrease in the value of exports and imports during this time.

“The impacts of ambient noise on animals is a difficult question to address because controlling ocean noise is almost impossible at the relevant scales,” said Maj Thomson, who has been working with Dr. Barclay for four years. “Observing the changes in ocean noise during this unique time may provide opportunities to better understand the impact human activity is having on the ocean.”

Dr. Barclay also noted that there is a group of scientists who have been planning an International Ocean Quiet Experiment. The experiment would see scientists from all over the world who study underwater sound work to quantify the impact of this virus on certain noise levels in the world’s ocean.

“There is extreme value in having this information from the observatories at our fingertips,” says Dr. Barclay. “Now that we have this data, we plan to look at it in detail and dissect it over the entirety of the pandemic. This could be an important opportunity for biologists and ecologists to study and understand what exactly happens when we turn down the noise in the marine environment.”