Each year, students in CHEM 3203: Advanced Analytical Lab are given the opportunity to solve a problem — and do something that has never been done before.

The course, created seven years ago, shifts emphasis on enhancing problem solving, critical thinking, communication and time management. The students decide what they want to learn about, from initial project data and planning to experimentation and final presentation. Their projects link directly to building career skills and prepare all students individually for future goals.

This year, projects were planned as usual – supplies were gathered and background research was complete. And then the COVID-19 pandemic hit. Students only managed to get two days out of a possible six in the lab before the university transitioned to online learning. Unfortunately, the kind of work they were doing could not be transferred online, so the projects had to come to an immediate end.

“Student alumni from this class have credited the course for giving them the skills to land their current jobs,” says Roderick Chisholm, an instructor in the Department of Chemistry. “Past projects are being pursued for patents. We have had students inspired to start a local spinout company. So, for everything we have done this year to promote the benefits of these projects, we knew our students would be extremely disappointed to lose out on the opportunity.”

With that in mind, the instructors proposed that a final presentation could be conducted online, with an objective of showing what the students had learned, and what they could have done if time was available in the lab. This was just completed via Skype on April 3.

“Every student displayed tremendous enthusiasm in showcasing what they had learned,” says Chisholm. “Students typically work in pairs. Despite being isolated, they gave rehearsed presentations, bouncing back and forth through their slides, highlighting what they did, what they wished they could do next and, most importantly, what they learned.”

This year, like every year, two winners were announced. These projects demonstrate the greatest initiative, creativity, problem solving and demonstration of scientific achievement. This is also a way of recognizing students who go beyond what is expected, even for the highest academic grade. According to Chisholm, these are the students that highlight the passion of Dal’s undergrads for learning and success.

The first award went to Emily Burke and Claudia Flynn, for their project, “The Colour Purple: A Spectroscopic and Colorimetric Identification of Manganese Using Cell Phone Technology.” 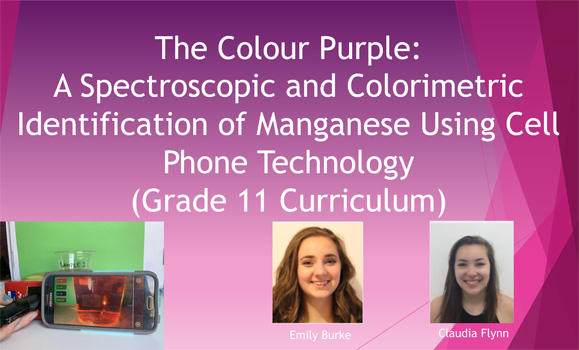 Emily and Claudia wanted an experiment that was safe, visually appealing, and easy to implement in any high school lab. Their chemicals created vibrant purple solutions, which can be used to determine the manganese content of a vitamin tablet. High schoolers can do this reaction, and visually assess the intensity of the colour to determine the amount of manganese. (The darker the colour, the more you have.) You can also analyze the solution using an instrument called a spectrometer. That instrument was in the lab, so they couldn’t complete that aspect of the work.

But they found a way to carry on. They used a regular cell phone and downloaded an app the converts the red/green/blue colour into a numerical colour code. The rest of their machine consisted of a cracker box, a flashlight, a piece of green paper, a clear plastic cup and some water (with food colouring). With their simple setup, they are able to quantify the colour of their solution with their phones and translate that reading to the chemistry happening outside.

Such a system could be easily adopted by existing or future high schoolers. They already have photos of the setup, and it would only be a matter of creating an instructional video, or a set of visual instructions, to send out to teachers and students. This idea enforces science activities in physics, chemistry, engineering, computer programing and math.

“This lab started out as a small idea but grew to become something that we both are extremely proud of accomplishing,” says Claudia Flynn and Emily Burke. “Even though we were disappointed that we could not finish the semester in the lab, by building the spectrometer at home, we were able to make “light” out of a dark situation. We took our lab to the next level, and we were both over the moon that we designed a feasible, and practical chemistry lab that could actually have an impact on how students look at chemistry.”

The second award went to Piper Sawchyn and Rosa Toutah for their project “JUUL, you better be careful with that e-cigarette.” 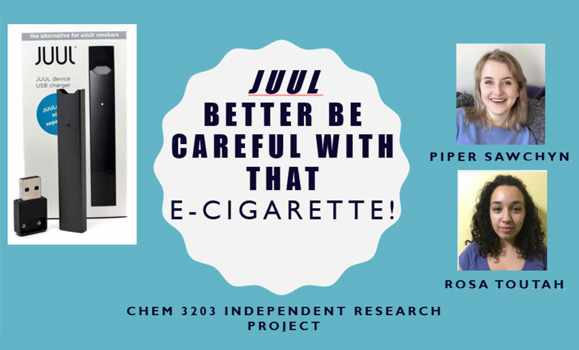 With no past experience in instrument design, Piper and Rosa took on the task of building an artificial ‘smoking machine’ to capture dangerous chemicals released into the lungs when inhaling cigarettes. They detected numerous dangerous compounds in the e-cigarettes, showcasing the possible dangers of these products, which are increasingly marketed towards youths.

According to Roderick Chisholm, the excitement this group demonstrated throughout their time in the lab, and during their presentation was contagious and also highlighted the spirit of being willing to try something new.

“I found having to do my own research on a topic neither my professors or supervisors had a lot of knowledge on was quite challenging, but in the end helped develop my research abilities,” says Rosa Toutah. “This includes being able to sort through scientific articles and discern the ‘good’ from the ‘bad’ or less useful information. Having to work in the lab alone and work with the GC-MS alone, I also learned a lot about how a lab works and how to work efficiently without instruction.”

There was also a project by Shay Heans and Jessica Sperryn that looked at filtering lead out of the water in Halifax using a grapefruit biochar filter.

“The feeling you get when you finally make something you’ve been working so hard to make is unmatched by any other,” says Shay Heans. “I wanted the project to be impactful, but also demonstrate the amount of thought and trial and error that goes behind synthesis.”

And another project by Mohammed Alabdoulsalam focused on an issue with light curing in dentistry.

“Make mistakes,” says Alabdoulsalam. “You’re not being held accountable for them, but you will learn a lot from them. Ask yourself questions and find the answers to them. Don’t be afraid to ask for help. Reach out to as many people as you can; you never know how they might be able to help you down the road.”

“Our students always step up . . . year after year, they show us that no matter how hard we push them, they will push themselves harder,” says Chisholm. “Because they want to learn. They want to build skills and show the world that they are ready to take on everything. These are the problem solvers of tomorrow. They just need the opportunity.”

A shout-out to a great team

According to the instructors, the class is such a success because of the team involved, who are there to support the students along the way.

“We especially want to give a shout out to the team of people who are always there to help the students,” says Chisholm. “This includes technical staff, TA’s, to other instructors in our department, and faculty members all across campus. There were visiting guest speakers and people who gave their time, shared their information, and even allowed us use of their personal lab space AND equipment. Our students are forever grateful to the many people at Dal who help them with their project.”