Above: Image of a blue whale (NOAA picture). Below: The bones being scanned by Dal researchers. (Provided photo)

Researchers at Dalhousie have scanned the skeleton of a young blue whale, giving them a trove of data on the endangered marine giant and creating a unique virtual 3D model of the largest animal on the planet.

The team of scientists has successfully scanned almost all of the bones of the roughly 18-metre whale that washed ashore in Nova Scotia two years ago following a suspected ship strike.

Chris Nelson, a senior instructor in the Department of Engineering at the Faculty of Agriculture, says the painstaking and innovative feat will allow them to build a virtual 3D replica of the young mammal that can be shared with other researchers. 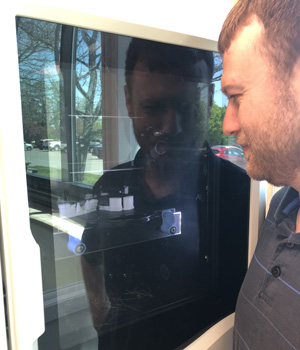 “Once you have that 3D data, the sky’s the limit on what you could do with it,” says Nelson (pictured), who worked on the project together with Chris Harvey-Clark, university veterinarian, and Gordon Price, associate professor in the Department of Engineering.

“With those scans, we can modify whatever we want – or whatever anyone else wants to do with it. We could make a whole other blue whale model.”

The scans provide a digital blueprint of the skeleton that will help in the design of an exhibit of the whale that is slated to hang in the atrium of the Steele Ocean Sciences Building in 2021.

Nelson says the 3D scanning also allows them to replace any missing bones by scanning ones they have, mirroring them and then printing them. For example, he says they will replicate one of the blue whale’s missing front fins.

Notably, it creates a virtual museum of the whales they work with while also facilitating blue whale research that has been hampered in the past by the size and often inaccessible location of the little-known animals, which can be as long as three school buses.

“We’ve got a hell of a resource for people. To have that database of bones, you could do a volumetric study or look at bone density or biomechanics,” Nelson says, adding it could lead to less reliance on estimates and yield a more precise understanding of the species.

“We will be able to make a 3D model that you have on a table top and have a more closeup view of the whale in its entirety. Every bit of data will help.”

Engaging the public — and students

Nelson says the team first had to clean the whale’s bones and remove all the tissue through a composting process before getting them to a stage where they could start putting them together to be scanned. The undertaking, which has rarely been done, is a great example of some of the exciting work being done under one of Dalhousie’s signature research clusters, Sustainable Ocean, in alignnment with the UN Sustainability Goals. 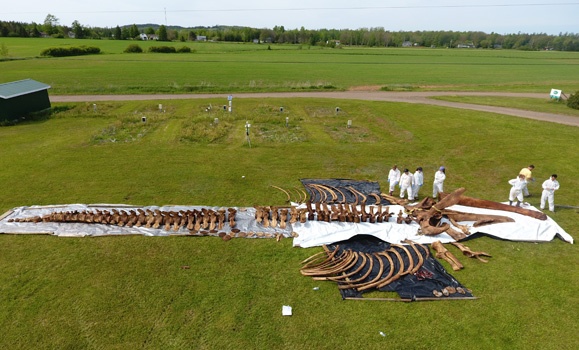 The discovery of the whale carcass near Liverpool in 2017 inspired the university’s “Dive In: The Blue Whale Project,” which will set a new industry standard in environmentally sustainable decomposition and enhance students’ understanding of marine mammal science.

Read also: Up close with the largest animal on Earth (Aug 2018)

The public is also being given the chance to be part of the ambitious project in a new fundraising campaign. For donations ranging from $100 for a whale phalange to $15,000 for part of its jaw, people can name one of the 230 bones.

For more information, or to purchase a bone to name, visit the projectDAL website.