“I was talking to a Hawaiian Indigenous leader,” Anya Waite recalls. “He said that instead of ‘Where are you from?’, they ask, ‘What are your source waters?’”

She instantly thought of Pockwock Lake, past Hammonds Plains, from when she was a little girl, before it became the main source of drinking water for much of the Halifax Regional Municipality. She used to camp there with her dad. “It became a part of me,” she says.

For Dr. Waite, joining Dal eight months ago as the associate VP for ocean research and scientific director of the new Ocean Frontier Institute brought her back to her roots. Her father, P.B. Waite, was a prominent history professor at Dal and famously authored the two-volume history of the university, The Lives at Dalhousie. Anya completed her undergraduate studies at Dal before leaving Nova Scotia at 22 to do a PhD at the University of British Columbia. She has since lived and worked in South America, New Zealand, Germany and Australia.

Coming home, she says, has been even better than she’d hoped. This is where she remembers running around in the woods and swimming in lakes, Nova Scotia’s environment shaping who she was and how she saw the world.

“I even just moved into our family home. The depth of the community connections here are so meaningful. I met a guy at Java Blend who knew my mom for 30 years. It was coming full circle.”

Leaving oceanography — and finding it again

The circle has been a wide one. She started out studying music — violin — but transferred to English before realizing she loved science too, and settling on combined majors in English and Biology, with a minor in Chemistry. She recalls spending a summer working with the late Bill Freedman (who chaired the Department of Biology from 2000-2007). “He was a mentor, not just scientifically, but regarding how to approach Nova Scotia as an ecosystem.”

After travels around Europe, Morocco and Turkey, Dr. Waite studied Biological Oceanography at the University of British Columbia under the late Paul J. Harrison. She did a prestigious post-doc at Woods Hole Oceanographic Institution, but found it disappointing, intellectually.

“The conversations were all about money,” she says. “Ideas seemed secondary.” She hadn’t expected to find herself in such a dry environment, and it drove her away from oceanography for a time, instead taking a job running a laser microscope at a lab in New Zealand for three years.

While there she gave a talk at the National Institute for Water and Atmosphere. “They invited me to go to sea,” she says. “I hopped on board and felt myself getting dragged back in to exciting conversations about the ocean, wrote some papers, and was sucked back into oceanography.” 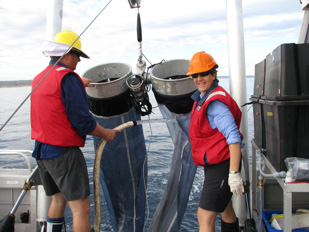 “To step into a senior German professorship is a very special privilege,” Dr. Waite says. “You’re expected to bring the full power of your brain. And you’re heard.”

But when the opportunity to head up the new Ocean Frontier Institute — a $220-million international hub for ocean research led by a partnership between Dalhousie, Memorial and UPEI — she realized she could have the same sort of opportunity in the home she left, but that never left her.

“It was a difficult decision to leave Germany,” she says. “But at the same time, it was a no-brainer. The conversation is edgy and dynamic here. We’re having conversations with industry, Indigenous communities and the rest of society, hooking science into where it can deliver something.

“The whole mandate is to do excellent science and deliver outcomes to society… to consolidate research so it’s more than the sum of the parts.

Dr. Waite is fascinated by the collaborative approach, working with various communities and people with varied areas of expertise: natural and social scientists and engineers, as well as entrepreneurs using science to inform their innovations, from several Atlantic universities. “I’ve had exceptional conversations almost every day since I started this job.”

In fact, she describes her daily routine as being focused to constructing those conversations, moving them forward. She says her role requires more listening than speaking.

Fortunately for Dr. Waite, oceanography is by nature a multidisciplinary branch of science, so bringing together varied styles and viewpoints toward a common objective is something she has been trained to do. 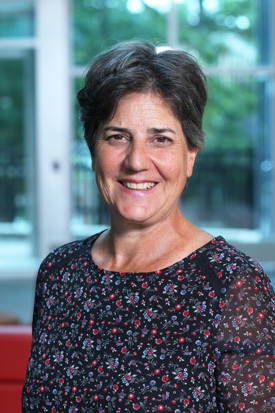 “Mentorship is so important, and I’ve lost some old mentors recently. When it’s gone, you really miss it.”

“It’s amazing, thinking back, how huge an impact good and bad leadership has had on my career.”

“I wanted to give something back to Nova Scotia that would move the science enterprise in the right direction.”

“While my job is to lead, my vocation is to serve.”

Playing violin — chamber music in particular. It’s one of the few things that is so intense, so complex, so demanding, that it clears my head of anything else. Even sports don’t do this in the same way..

If you were to leave academia and go into any career you wanted, what would you choose??

Writing. Fiction, poetry, and nonfiction. I love it all..

My mother. She was a demanding intellectual, a passionate and devoted mother, and an ethical leader. She was anti-authoritarian, had been arrested for anti-Nazi activity in her native Croatia and had a disdain for the abuse of power, something that coloured her politics and her personality. We were taught always to question, to respect authenticity and knowledge, and to fight for the truth, however we saw that.

I was going to say Elizabeth Bennet (of Pride and Prejudice), but I think it would be Eleanor of Aquitaine. She was a powerful woman who challenged the men and the rules she interacted with. We named our daughter Eleanor.