John Dewey speaks at the Conjugate Margins conference following a ceremony to present him with a Dal honorary degree. (Danny Abriel photos)

This week Dalhousie’s Department of Earth Sciences is hosting the Conjugate Margins conference, where geoscientists from all over the world will gather to explore the latest research examining the geological activity under the Atlantic Ocean.

Over 250-million years ago the Atlantic seabed began splitting apart when the tectonic plates under the Earth’s crust slid away from each other. That movement created a rift where magma from deep in the Earth could exit, causing an underwater mountain range called the Mid-Atlantic Ridge. The evolution of these changes in the Atlantic Ocean helps geoscientists understand the distribution of resources on both sides of the Atlantic.

To celebrate the university’s 200th anniversary, those in the department invited their international colleagues to Halifax to be a part of something special: granting John F. Dewey, a world-renowned geoscientist residing in Oxford, an honorary degree.

“As one of the early participants of the ‘New Global Tectonics’ scientific revolution in the 60s, Professor Dewey has become a luminary of 20th century earth science,” explains James Brenan, chair of the Department of Earth Sciences. “He turned the geological community on its head by proposing radical new ideas that linked the formation of ocean basins, mountain belts, and massive fault zones to the interactions between Earth’s tectonic plates.”

Known as “plate pushers,” Dr. Dewey and his colleagues were early supporters of plate tectonic research, a theory that fundamentally changed our understanding of Earth’s behaviour. 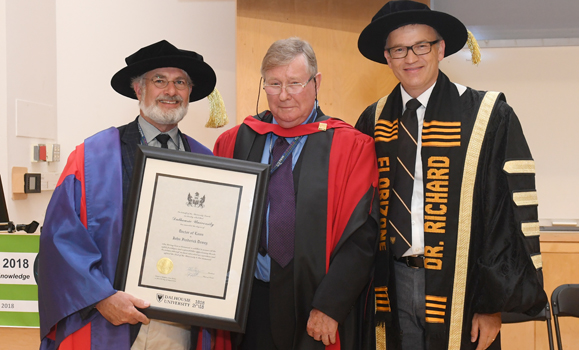 “It with great pleasure that we’re able to meet and listen to Dr. John Dewey, one of the last of his generation,” says Grant Wach, an Earth Sciences professor at Dalhousie and co-chair of the conference. “He shared his insights into some of his observations on the evolution of the Atlantic.”

Perhaps critical to Dr. Dewey’s success as a scientist is his ability to unapologetically question even the most widely-accepted principles in geoscience. In doing so, Dewey ignited a career that allowed him to make outstanding contributions to science.

His scientific leadership provided a clearer understanding of the tectonic evolution of the basins along the Atlantic Margin, and that leadership has been a key driver for many of his students’ successful careers too.

Dr. Dewey received his Bachelor of Science with First Class Honours from Queen Mary College in London in 1958. His PhD from Imperial College in 1960 examined the geology of Western Ireland. He spent many days in the field and credits the study of rocks at outcrop to providing him with the skills to develop concepts of global tectonics.

Long is the list of Dr. Dewey’s many awards and accolades, some of which recognize the top geoscientists in the world.

Dr. Dewey has received the Wollaston Medal, the Geological Society of London’s highest award granted. It’s given to geologists who have significant influence through a substantial body of excellent research in either or both 'pure' and 'applied' aspects of the science.

Another is the Lyell Medal, which the Geological Society awards to earth scientists of exceptional quality. The Penrose Medal of the Geological Society of America was awarded to Dewey in recognition of his eminent research in pure geology and for his outstanding original contributions that marked a major advance in the science of geology.

Dr. Dewey is a member of the Royal Society of London and the US National Academy of Sciences. He has also been awarded honorary degrees from Memorial University of Newfoundland and the National University of Ireland.

Dr. Dewey’s insights were documented in a series of highly influential papers that combined detailed knowledge of rock-types, structures, and field relations to reinterpret a variety of large-scale geological features. These include: the formation of the extreme topography of mountain belts such as the Alps and the Himalaya, why ocean basins seem to open and close along the same suture, the origin of unusual linear basins as ancient sites of continental break up, and the identification of ancient seafloor now exposed on dry land.