From student organizations to organized politics, from the campus to the broader community, Joy Shand puts the “active” in activism.

Joy is a fourth-year Bachelor of Arts student completing a double major in Canadian Studies and Anthropology. Over the past couple of years, she has become more involved as an activist on and off campus. She has served on the King’s Student Union council and Campus Planning Committee, marched with fellow students in the National Student Day of Action, stood for solidarity with the Standing Rock Sioux Nation and was recently nominated to the Dal Canadian Studies Society executive.

“Every time I sit on a committee or participate in a meeting, I bring a focus on youth issues — and one of the most important aspects of that for me is anti-poverty advocacy,” says Joy.

From classroom to action

Joy’s research interests focus on precarious living, which she says is characterized by a work experience that is short-term, low-paid, contract-based and without benefits.

“In other words, working conditions that for many young people, such as myself, have become the norm, and which for many of us has been the only kind of work we have ever known,” she explains.

“Precarity creates and contributes to a number of social issues, including poorer health, higher stress, greater mental illness, the delay of age milestones (such as starting a family), inability to contribute to the economy or tax base, financial risk aversion and difficulty accessing education, to name just a few.” 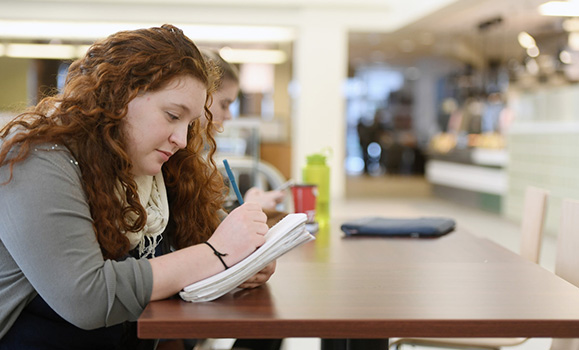 “That class was one of the best I've ever taken," says Joy. "It opened my eyes to the complex interactions that exist between race, gender, age, education, citizenship status and the many other factors that contribute to people's experience of precarity.

“As a result, I've become an advocate for Basic Minimum Income (BMI), also referred to as Guaranteed Income, a change that would see every eligible individual receiving a minimum income of approximately $16,000 per year, depending on the variation of the program.”

Joy acknowledges that while $16,000 is still not a lot to live on, especially since costs of living vary across the country, BMI provides greater security to those living precariously by giving them a reliable floor for their income.

“To be clear, BMI is meant to be only a ‘survival’ amount — but this shift is fundamentally important, because it disentangles the value of human life from human productivity and the ability to work,’ she says. “BMI is only one step to ending poverty, but I believe it is a crucially important one.”

Joy took her interests in precarious living, politics and activism to Ottawa this fall when she attended a conference called The Precarious Generation: Millennials Fight Back, hosted on Parliament Hill by MP Niki Ashton. There, she heard from several panelists who are currently strategizing solutions to the problems that precarious work has created.

Jerry Bannister, associate professor in the Department of History and co-ordinator of the Canadian Studies Program, says Joy’s dedication to addressing social issues is an inspiration.

"Joy's commitment to social justice demonstrates the importance of education beyond the classroom,” says Dr. Bannister. “Her involvement in conferences and other initiatives shows the power of experiential learning, because it adds a whole new dimension to her work in Canadian Studies."

Learn about some more Faculty of Arts and Social Sciences students who are also using experiential learning to leave a lasting impact.