The Peace Tower of Canada's Parliament buildings in Ottawa. (Photo by Colin, used via Flickr under Creative Commons license)

That’s what Bertrum MacDonald, currently acting dean of the Faculty of Management, and his team with the Environmental Information: Use and Influence research program asked themselves before setting the wheels in motion on a new interdisciplinary graduate course.

“Our research is definitely multidisciplinary, because it’s dealing with questions of what happens to marine environmental information in public policy decision-making contexts,” says Dr. MacDonald. “It began with looking at major reports that were generated by governmental bodies, and the question was: is anybody reading these?”

It’s an important question, one that takes on extra emphasis as Canada enters a period of transition at the federal government level.

“The question of how information is used, particularly in policy and decision making, is not a trivial matter,” adds Dr. MacDonald. 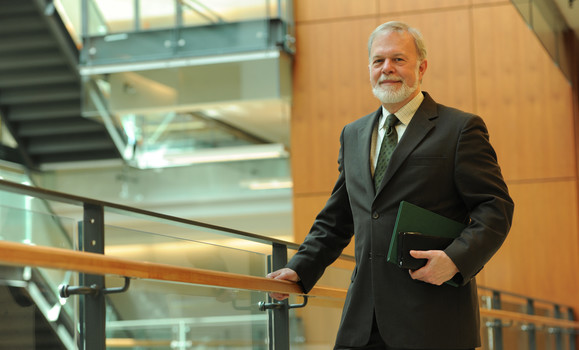 Drawing on the interdisciplinary nature of the Faculty of Management at Dal, the team developed "INFO 6100 – Role of Information in Public Policy and Decision Making." While Dr. MacDonald is the course lead, other members of the team that helped develop the course include Kevin Quigley (School of Public Administration),  Peter Wells and Elizabeth De Santo (adjuncts with the Marine Affairs Program) and Anatoliy Gruzd (formerly of the School of Information Management).

After receiving approval to launch their idea two years ago, the course was tested for a year, went through a review, and has now been successfully offered for two semesters. The most recent iteration, which concluded in April, boasted attendance of students from seven different masters programs such as Information Management, Public Administration, Resource and Environmental Studies, Health Promotion, and Engineering. (The course will next be offered in the Winter 2016 term.)

Dr. MacDonald says that the presence of students from varying backgrounds is a testament to the multidisciplinary nature of the course.

“We’ve been receiving very positive feedback from the students,” he says. “I think it’s now starting to build a reputation because there’s nothing like it on the campus where we’re grappling with questions of what happens in decision-making and how information flows into decision-making processes.”

In fact, it’s not just the first course of its kind on the Dalhousie campus; it might also be a pioneer on the world stage.

“The part that is really the significant glue for this is the role of information,” says Dr. MacDonald. “There are other schools that will deal with the science or the public policy, but none of them are taking those two elements and using information as the means of trying to understand the intersection.”

The course begins by introducing the concept and practices of evidence-based policy and decision making, teaching students to identify current-day practices in the production and communication of research-based information. From there, students build on this foundational knowledge by outlining and describing activities where science and policy meet, and assess how research-based information and publications are utilized.

The class welcomes several guest speakers throughout the term to enhance students’ understanding of public policy and decision-making. Speakers for the most recent iteration of the course included Janice Graham of the Faculty of Medicine, scientist Bob Fournier, Nature Magazine journalist Daniel Cressey (who joined the class from London), Halifax MP Megan Leslie, historian of science Ian Stewart and several graduate students.

Dr. MacDonald says having those different perspectives is instrumental in the students’ ability to understand and apply knowledge from the course.

“One of the things that I noticed when I came to Dal was the size of the campus, which I think contributes to the ability to cross boundaries,” he says. “Not everyone can walk into an interdisciplinary environment and speak so that it makes the connections, but the speakers and the students have been really great. We’re excited for what next term will bring.”