Head of the class

When Aaron Prosper was a young boy, he was taken to a lecture given by Nadine Caron. It turned out to be a night he would never forget, with a message he would carry with him every day since.

Caron is well known for being the first Canadian female general surgeon of First Nations descent. She is an inspiration to Indigenous people across the country and her words struck a chord with Prosper years before he made history of his own as the first Indigenous president of the Dalhousie Student Union.

“What I remember most is how she spoke of success,” says Prosper. “She said success, in terms of our country’s reconciliation, is not measured by who did something first. She said true success is about creating pathways so that more Indigenous people like her, and like me, can achieve their dreams and reach their goals.”

Today (Monday, October 1) is Treaty Day in Nova Scotia, which marks the beginning Mi’kmaq History Month by recognizing the unique and special relationship between Nova Scotia and the Mi’kmaq. For Prosper, elected as DSU president last spring, it’s more than just another day at the office — it’s one that highlights the significance of being the first Indigenous student union president in the history of Dalhousie University.

It’s a role, and responsibility, he embraces.

“I’m honoured to be the first, no question. I’m honoured that so many students, from all walks of life, believed in me and gave me their vote of confidence,” says Prosper. “If I’m a trailblazer by doing this, that’s fine, I’ll take that on. But my hope is that it inspires other Indigenous young people to take on these roles and see themselves in these roles.”

Prosper grew up as a member of the Eskasoni First Nation before moving to Halifax to study at Dalhousie. Now in his fifth year of the Bachelor of Science (Neuroscience) program, Prosper has his sights set on a career in medicine.

His upbringing in the largest Mi'kmaq community in the world has shaped everything about him, including how he presides over a union of close to 19,000 students. 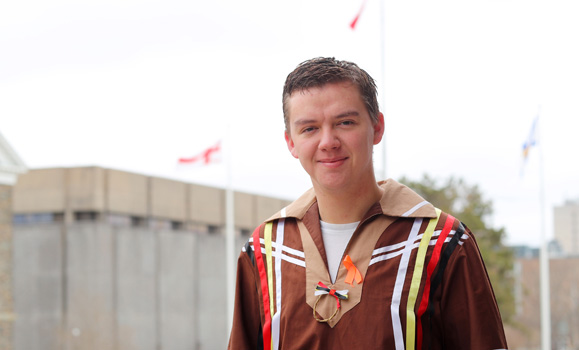 “As Indigenous people, our way of thought is never about the personal gain of an individual. It’s about the gain of the community,” says Prosper. “Our frame of mind is not ‘What can I get out of this?’ So I’m taking this role wondering what I can do to help students gain from this. We take that approach in our community, trying to make a positive impact on everybody in the community with everything we do.”

Serving his community is nothing new to Prosper. He has routinely volunteered at events and centres throughout his life, including the Mi’kmaw Kina’matnewey Red Road Project, the Native Alcohol and Drug Abuse Counselling Association (NADACA), and other Mi’kmaw organizations.

He is proud to be an ambassador for Mi’kmaq education, culture and language, and strongly believes in learning from his community’s elders. Over the years Prosper has absorbed a great deal of knowledge from a number of mentors and leaders in Eskasoni First Nation, and he says Albert Marshall in particular has had a lasting impact on the way he approaches classes, his presidency and the world in general.

Marshall is highly respected Elder of the Mi’kmaw Nation and is widely known as a passionate advocate of cross-cultural understanding.  Prosper sought Marshall out when he was considering running for student union president, and as usual his mentor provided sound advice.

“I take a lot of guidance from my elders. They have so much to pass on,” says Prosper. “I really look up to Albert Marshall. He’s given me a lot of guidance and was one of the people who encouraged me to run for student union president.”

With the support of his family, friends, Elders and mentors, Prosper has set out to be a student union president who is relatable, approachable and open to feedback, whether it’s positive or negative. He says it’s an approach the entire student union staff and executive believe in.

“We try to run things from a grass-roots level. We want to engage students and get a good feel for what the student voice is,” said Prosper. “All of our executive, they take that workload very seriously. They all go above and beyond their portfolio to add to the student voice and improve student life. I’m surrounded by great people [at the student union]. Every one of them is doing this because they want to help student success at Dalhousie.”

Prosper has been meeting with students across Dalhousie since the new academic year began in September. He stresses to students that he’s there to build relationship with them and for them, all in an effort to help them get the most from their time at Dal.