Innovation on the high seas

During August and September, the Northwest Atlantic Ocean’s sea surface temperatures creep up to just below 20 degrees Celsius. The warm waters bring with them some cold blooded creatures: sharks.

The OTN-led shark tracking program is a Dal undergraduate field course — the first of its kind in Canada — where students are trained in research tagging and tracking techniques. Each year, the class charters the services of shark fishing boat captain Art Gaetan for a day spent on the Northwest Atlantic.

Sharks are captured using rod and reel, gently lifted on to a specialized table and an electronic acoustic tag is inserted into the abdominal cavity. The process takes roughly four minutes by Dalhousie PhD candidate Manuel Dureil, who leads the class.  The study also seeks to understand the behaviour and seasonal migrations of a specific population of blue sharks. 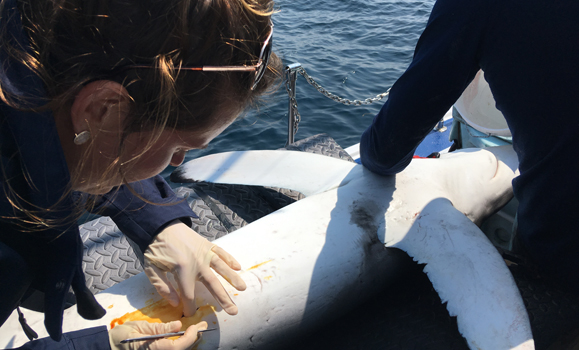 So far, data from sharks’ acoustic tags suggest a pupping area approximately two hours off the coast of Halifax where the sharks give birth to live young. Most of the individual sharks caught and tagged are juvenile females that hang around until late autumn or early winter before moving off the Scotian Shelf.

Working in the field

On special tagging expeditions, guests can glimpse life in the field. Earlier this month, Fillmore and Runte braved the chance of temperamental waters to experience the shark tagging program first-hand.

The crew, rounded out by brewmaster and Tag, You’re It! conservation-beer collaborator Jeremy White and OTN Executive Director Fred Whoriskey, successfully tagged three female, juvenile blues with acoustic tags. An additional three more blues and a juvenile porbeagle were caught, marked with external tags, then released. The passenger also got to spot a minke whale and an ocean sunfish in the water.

The mission was an opportunity to bring together stakeholders to exchange information — not just on sharks, but on OTN’s global research infrastructure, which serves more than 400 scientists across Canada and internationally.

“It was a wonderful opportunity to provide the President of our chief funding organization and our local MP first-hand experience on the fascinating work that OTN does and our commitment to conservation of the ocean’s critical species” said Sara Iverson, OTN scientific director.

While shark wrangling is business as usual for Dal researchers and OTN headquarters staff, Dal and OTN understand that it’s an exceptional experience for students and special guests. Happily for those who can join the study, sharks are given nicknames, part of record keeping that identifies sharks by tag number and name. Rick Mercer, who famously joined OTN’s shark tagging expedition for a segment of The Rick Mercer Report back in 2014, named “his” shark Blue Rodeo.

Students are also given the opportunity to name the sharks they reel in. On this particular trip, shark number 6155 was officially named “Daisy” after Fillmore’s daughter — a shark fanatic who is thrilled about the honour.