The language of friendship

Students Haruka Aoyama, Dania Shalabi and Delicia Marie Toro met each other and became friends in the first week of their English for Academic Purposes class. And that has made all the difference.

“Being here alone first week was tough,” Dania recalls, “but I met Haruka and Marie (Delicia) and it made my week better. We explored Halifax together.”

Delicia agrees that the class was an important part of settling in, “If I had to just start my university program right away, I think my experience would have been really different. I really needed close friends and close relationships to start with.”

More than simply a way to improve their English language skills, the English for Academic Purposes class also gave the international students an introduction to life in Halifax and the Dalhousie community while supporting their success in university.

For Haruka, the class was an admission requirement. “I had to improve my English to be ready for university,” she explains. “But we also learned how to write academic papers and other rules they use in Canada. So it's not only for English but for university in general and it was very helpful.” 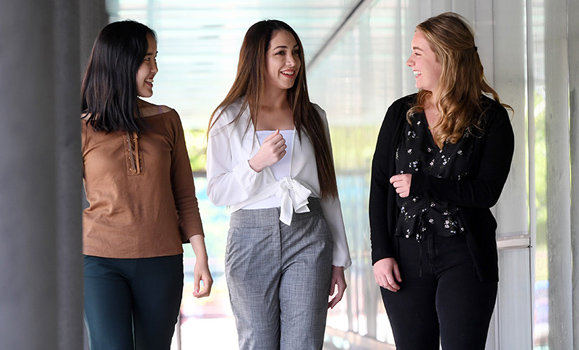 While their friendship got started in class, they say it was solidified over Thanksgiving dinner. The three had registered for the Share Thanksgiving program through Engage Nova Scotia and were invited to join a family from Prospect for their Thanksgiving meal.

“It's just a one day program but the Canadian dad — his name is Sean — he's so nice that even after Thanksgiving he invited us to join them for Christmas and Easter,” says Haruka.

“They taught us many things about Canada and Halifax,” Dania adds, “We go out a lot together. It’s like family.”

From there to here

One of the things that makes the trio’s friendship incredible is their variety of circumstances — they come from different parts of the world and are studying different subjects.

Haruka calls Okayama, Japan home but came to Dal because she wanted to study in Canada and what she saw on the Dalhousie website just felt right to her. After a slight change of course, in terms of her subject area, Haruka is now pursuing a double major in Political Science and Environment, Sustainability and Society.

“In my first semester, I took Political Science as an elective and I got the H. B. McCulloch Memorial Prize in Political Science,” Haruka recalls. “I thought, ‘oh, I enjoy doing this and maybe it’s something I can do well,’ so I changed my major.”

Dania spent her early years in Alberta before her family returned to Amman, Jordan. She chose Halifax because it was relaxed and quiet. “I like the reputation of the university,” she recalls. “And I liked Halifax because it's small and everybody is friendly here.”

Currently a science student, Dania has decided to major in Biology. “Choosing a major is a hard thing for me — I've changed my major before. But now I like studying Biology overall.” 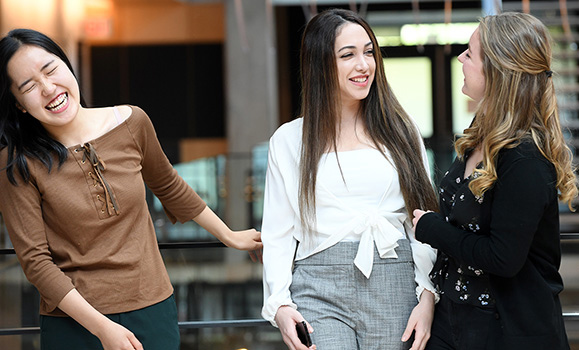 Delicia came to Dal from Montpellier, France. “I just chose Dalhousie as my first option,” she says. “It was in a small city so the adaptation would be easier since I was going so far from home.” Currently studying Psychology, Delicia hopes to continue on to medical school.

When they look back on their journey from around the world to Halifax, they realize they’ve learned a thing or two that might be useful to other students travelling far from home.

Dania shares advice that her dad told her. “He said, ‘Know about everything one thing and about one thing, everything.’ So, not only knowing everything about your major but also exploring and asking about anything you don't know.”

“Travel a lot,” Haruka says. “You can travel just 30 minutes from the city and there are just so many beautiful places. So, don't just stay home and get bored.”

“Really be open minded and try to speak English because that's the language here,” Delicia says. “I feel like as much as I wanted to speak in my own language, speaking in English really helped me a lot to make new friends. And you learn so much from other people.”