Department of Economics Faculty of Science

Dal.ca Home
Faculty of Science
Home
Department of Economics
News
News
2021
November 2021
04
My Journey of Becoming What I am Today

My Journey of Becoming What I am Today

Posted by Economics Department on November 4, 2021 in News 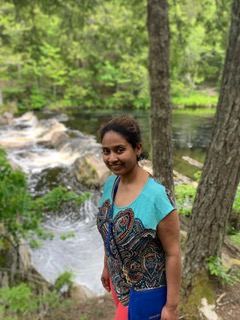 I am Mrittika Shamsuddin, currently an instructor in the Economics Department of Dalhousie University. It is an honor to get this opportunity to talk about my journey of becoming what I am today.

Growing up as the daughter of a government bureaucrat in Bangladesh meant moving around a lot as allowed by my father’s numerous job postings. So, my childhood was spent as dreamer, moving through different parts of rural Bangladesh, which was, rich in its lush greenery, and in its allure to chase butterflies and to go cycling by the lakes. Yet, chaos was only a step away. As young girl of six, I saw with my own eyes, as zealots burnt down the temple in front our house, and used tear gas on my neighbours, leaving them no choice but to flee to a different country – all in the name of religion. And these would become my first experience with refugees and immigration. My current research revolves around the challenges that immigrants and refugees face in integrating in a new environment and their impacts on the host community.

Then when I was in middle school, my father got transferred to Dhaka, the capital of Bangladesh, drastically changing life as I knew it. With no playgrounds and butterflies to chase, I was stuck in our small apartment, with the concrete jungle around me. I could not see green through my window anymore; just a rickety old building, with an ugly front gate bearing the words “Government High School” and flying the Bangladeshi flag. To make matters worse, my parents had to get me admitted to a small private school, because I could not pass any of the government school entrance exam in Dhaka. And this was but only the beginning of yet another, completely different world for me. I began to realize that math was the religion at home. My grandfather was a headmaster and math schoolteacher during his time, my uncles were math professors at universities, and my younger cousins could solve math problems while having dinner, which I could not solve even working through diligently on pen and paper.

And yet, as I struggled, alienated from my dream world, and suddenly thrust into reality, I did not stop looking through my window. Through my window, I could not help noticing, that on the first Thursday of every month, the girls in the government high school would line up to collect a “prize money”, which I later realized as I grew older, was their “stipend”. The “prize money” sure made them happy, and in my forlorn world, made me jealous. Why do they get to have the “prize money”? Why do they need it? Who is giving it to them and why only the girls get it? And many years later, I tried to answer some of these questions in one of my PhD dissertations chapters at Georgetown University.

The other “thing” I could not look away from was my grandfather, who took up the mantle to tutor me in Math and English. He taught both through storytelling. He told me stories about what motivated each problem, about Pythagoras and Archimedes’ eureka moment, about Galileo and his power of observation, and he told me about all the different students he has had. And as I slowly improved in Math and English, I could not help but marvel at the strength and influence of a good teacher.

Fast forward a few years, the rural me was competing at an international level to gain admission to a liberal arts college in the United States. And when the time came and I was admitted to Lafayette College, Pennsylvania, I chose Mathematics and Economics as my double major. The four years at Lafayette College were very enlightening. It was the first time I was living on my own and making my own choices; away from home, from parents, and even further from my rural greenery. I had to work many menial jobs to pay for my living and had to pull many all-nighters to complete my assignments. And finally, my diverse childhood experiences began to be tied with a single thread: Economics, with its focus on human decision making, and Mathematics, with its ability to model society, them coming together to build simple policies to better the lives of millions, and good Professors, with their strength and influence on students. It would also be at Lafayette College, where I would first put to test my abilities as a teacher myself.

Thus, it came as no surprise, when I decided to pursue my Ph.D. to study the effect of social protection programs on labor market of South Asian countries. After my PhD, family obligations became a priority and I joined UAE University (UAEU) at Abu Dhabi as an assistant professor. UAEU had a very tech savvy campus, segregated by gender and I was teaching in both. The students were very different from the students that I had at Lafayette College and Georgetown University, in their backgrounds and aims in lives, but that made the job more interesting. I learnt from the students as much as they learnt from me and realized learning is not always goal oriented. It is a process that leads to change, and I felt proud of me for the first time when after graduation, one of the female students got a job with the Ministry of Economic Development and reached out to work on a project that investigates the failure of government policies to increase national employment in the private sector and a collaboration started that is still ongoing.

Then in 2018, life played its wild card one more time and my family moved to Canada, and I joined Dalhousie University. We, my husband, and I, had to sacrifice a lot for this move, both financially and professionally but as we got settled, we began to see the silver lining. At Dalhousie University, I met some bright and beautiful minds among my colleagues and students, from whom I have continued to learn. In Halifax, I seem to be living in the laps of mother nature, walking by the shore, and striving to affect the lives of my students and learn from them, along with collaborating with researchers from around the world to raise awareness for more evidence-based policy making.