Faculty of Science
Back To Event Listing
Save to calendar
Permalink

Abstract
Hadean zircons, from the Jack Hills (JHZ) and other localities, are currently the only window into the earliest terrestrial felsic crust, whose formation remains enigmatic. Based upon new experimental results, generation of such early crust has been hypothesized to involve the partial melting of hydrated peridotite interacting with basaltic melt at low pressure (<10 km), but it has yet to be demonstrated that such liquids can indeed crystallize zircons comparable to JHZ. Thermodynamic and geochemical modeling were used to test this hypothesis. The predicted zircon saturation temperatures of <750°C together with the model zircon Th, U, Nb, Hf, Y and rare-earth element (REE) contents at 700°C, δ18OVSMOW signatures and co-crystallizing mineral assemblage were compared to those of the JHZ. This comparison is favorable with respect to crystallization temperature, most trace element contents and mineral inclusions in zircon. Discrepancy in δ18OVSMOW signatures may be explained by hotter conditions of Hadean protocrust hydration. Finally, our work supports the idea that felsic magma generation at shallow depth involving a primordial weathered ultramafic protocrust and local basaltic intrusions is indeed a viable mechanism for the formation of felsic crust on 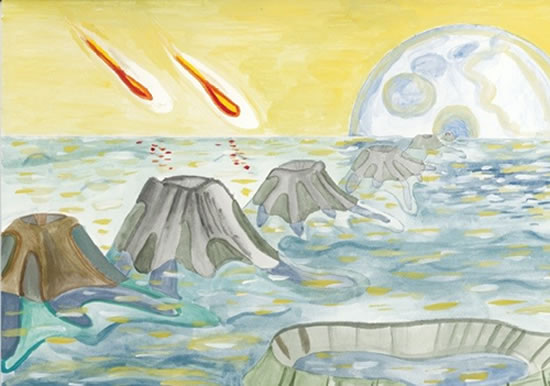 Figure: During the Hadean eon, more than 4 billion years ago, a liquid water ocean, volcanic activity, and meteorite impacts acted together to fashion the surface of early Earth. Credit: Anastassia Borisova.

BIO:
Anastassia Borisova is an Associate Researcher (CR1, CNRS) at Observatoire Midi-Pyrénées (Laboratory of Géosciences Environnement Toulouse), Toulouse, France. Dr. Borisova is also a Researcher at Moscow State University, Moscow, Russia, since 2006, and from 1999 till 2009 she was a Postdoctoral Researcher at Université Libre de Bruxelles, Brussels, Belgium; Institut des Sciences de la Terre d'Orléans, Orléans, France; and Observatoire Midi-Pyrénées, Toulouse, France. She was a Ph.D. student at Institute of Geochemistry and Analytical Chemistry, Moscow, Russia, from 1993 till 1997 and a postgraduate student at the Department of Geology, Moscow State University, Moscow, Russia, from 1988 to 1993, specializing in petrology and geochemistry. In 1998, she received the Ph.D. degree in geochemistry and petrology from Institute of Geochemistry and Analytical Chemistry, Russian Academy of Sciences, Moscow, Russia, with a thesis entitled "Pétrology and geochemistry of magmatic rocks from Aphanasey Nikitin et Conrad Rises, Indian Ocean.” Her areas of expertise include trace element and isotopic geochemistry of magmatic and hydrothermal processes, thermodynamics and kinetics of magmatic processes, origin of magmas and mechanisms of explosive eruptions, origin of ore deposits (hydrothermal and magmatic), and geochemical database on explosive volcanoes in situ microanalytical methods. In 2015, she received the HDR degree from University of Toulouse III (Toulouse, France).