The future of Indigenous‑led conservation in Canada

Posted by James Dinneen on January 27, 2020 in Research

SRES professor Melanie Zurba is a co-author on a recently-published study detailing the complexity of the relationship between conservation and Indigenous-led governance. This article about the study is republished from Mongabay under the Attribution-NoDerivatives 4.0 International (CC BY-ND 4.0) Creative Commons license. View the original article on Mongabay.

Indigenous people currently manage or have tenure on 40% of the world’s protected areas and remaining intact ecosystems. The deep connection to land and water that characterizes Indigenous cultures around the world suggests a natural alliance with conservationists working to protect those places.

But, as the authors of a recent paper in Biological Conservation argue, realizing this potential requires rethinking past approaches to conservation and ensuring that Indigenous people have substantive decision-making roles regarding their territories.

“Conservation cannot move forward ethically or legally without the full involvement of the people on whose territory the conservation is happening,” said Kyle Artelle, Adjunct Assistant Professor in the University of Victoria’s Geography Department and lead author of the study.

While the study has global implications, the team of Indigenous and non-Indigenous researchers focus on Canada as a key case for detailing the complexity of the relationship between conservation and Indigenous-led governance. Not only does Canada contain a disproportionate amount of the world’s intact ecosystems, but support of Indigenous-led governance there has shown great potential for advancing ambitious, effective, and socially just conservation goals.

In 2015, Canada committed to conserve at least 17% of its terrestrial lands and waters and 10% of coastal and marine areas by 2020. As the authors of the study make clear, Canada is unlikely to meet that or more ambitious conservation goals without the support and involvement of the Indigenous peoples whose territories overlap much of Canada’s existing protected areas and remaining intact ecosystems (see map below). 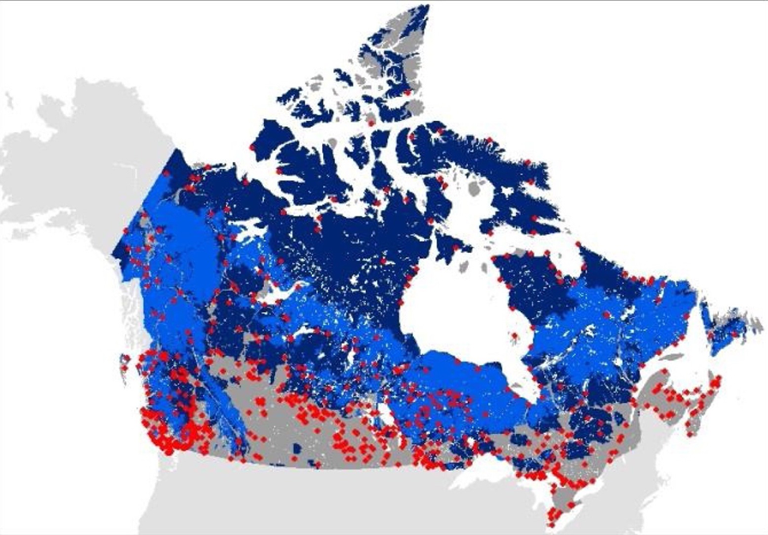 “The conservation sector, which is land-based, is a good place to articulate what [reconciliation] means,” said Steven Nitah, an Indigenous thought leader and former Chief of the Lutsel K’e Dene First Nation. “It allows all parties… to take the best of both knowledge systems that we have and use that knowledge system to manage these spaces in the spirit of reconciliation.”

There is some irony in linking conservation with reconciliation for Indigenous peoples in Canada. For much of Canada’s past, “conservation” meant dispossession and strife for Indigenous peoples. In order to create nature reserves premised on a framework of pristine wilderness, people who had lived on and stewarded the land for centuries were removed by the Canadian government and prevented from accessing traditional resources and sacred sites. In 1982, the Canadian Constitution affirmed Indigenous rights to prevent subsequent infringements on the rights and titles of Indigenous peoples. Still, the “fortress” model of conservation persists today.

“There’s this pervasive myth that untouched, pristine wilderness is somehow the pinnacle of conservation goals,” Jess Housty, a co-author of the paper and citizen of the Heiltsuk Nation, told Mongabay in an email. “This erases the way that hundreds of generations of Indigenous people have co-evolved with their homelands and carefully stewarded them as part of a reciprocal relationship; we tend to the lands and waters and they tend to us.”

In contrast to the “fortress conservation” approach, Indigenous-led stewardship relies on the ways Indigenous people both inhabit and manage land and water in ways often compatible with the conservation of biodiversity. “It might not look like what a lot of colonial conservation looks like,” said Artelle.

Indigenous people commonly hold rich knowledge about the territories in which they live and practice methods of stewardship developed through generations and defined by place-based laws and values. The authors cite evidence that Indigenous stewardship can be just as effective, if not more effective, than state-led efforts to conserve biodiversity or to resist deforestation, for example.

In addition to a long track record of successful stewardship over their territories, many Indigenous communities are located in remote areas and so may be better-positioned than the state to monitor and manage them. Around Canada, these systems of stewardship have taken the form of formal and informal guardian programs. Beyond the benefits for conservation management, these programs also support the transmission of cultural knowledge between generations, and can even reduce the load on the tax-base. For example, one study of guardian programs in the Northwest Territories found that there was $2.50 social return on investment for every $1 invested in the program.

“The numbers are there, let’s articulate them,” said Nitah.

The authors emphasize that the Canadian government has a long way to go in terms of supporting Indigenous-led governance and recognizing the full implications of the United Nations Declarations of the Rights of Indigenous Peoples (UNDRIP), which it adopted in 2016 after years of objector status, and which British Columbia was the first province to implement, in November 2019. However, there are a number of recent examples where support of resurgent Indigenous-led governance in Canada led to the protection of tens of thousands of square kilometers of land and water.

One precedent-setting example is Thaidene Nëné, a 14,000-square-kilometer national reserve park in the Northwest Territories created in August of 2019 that is co-managed by the Lutsel K’e Dene First Nation and the Canadian government. The initial proposal to create a National Park there in the 1970s failed to gain the consent of the Lutsel K’e Dene due to concerns over how the park would effect the community’s harvesting lifestyle. Within the new framework, the Dine community of Lutsel K’e remains within the reserve and shares responsibilities with the federal and provincial government for managing and protecting their homeland.

“The boldest and most ambitious conservation proposals in Canada are coming from Indigenous nations,” said Nitah, who led negotiations for the creation of Thaidene Nëné.

Research collaborations between Indigenous and non-Indigenous people are another encouraging sign of a turn towards Indigenous-led conservation in Canada. One significant initiative was undertaken by the Indigenous Circle of Experts, a group formed to provide recommendations on how Indigenous-led efforts might contribute to achieving Canada’s conservation goals. In a 2018 report, the group gives numerous examples of how Indigenous Protected and Conserved Areas (IPCAs) simultaneously benefit Indigenous communities and protected lands and waters.

“You look across the country and you see it happening at different scales all over the place,” said Melanie Zurba, a co-author of the study and Assistant Professor at Dalhousie University.

On a global scale

A 2018 study estimated that Indigenous people manage or have tenure rights over more than 25% of the land on Earth. Far more than areas controlled by other groups, that land includes intact ecosystems and protected areas—in other words, areas of conservation interest.

What the authors of the Biological Conservation study make clear for Canada they also make clear for the rest of the world: ambitious conservation goals are unlikely and perhaps even impossible to achieve without the support and involvement of Indigenous peoples. Put positively, supporting Indigenous-led governance could lead to valuable outcomes for conservation on a global scale.

However, even as the authors detail the ways in which Indigenous people are key conservation partners, they point out that the land-use decisions of Indigenous communities and conservationists will not always align. Here they emphasize that supporting Indigenous governance cannot be just a means to an end. Indigenous rights and titles must be honored as a basic prerequisite for advancing conservation goals and Indigenous people must have substantive, decision-making roles regarding their territorial lands and waters.

“Globally there needs to be reconciliation with Indigenous peoples,” said Nitah. “The remaining lungs of the earth need to be respected. Those that work to protect those lungs deserve the same respect.”

• Parks Canada. (2018). We Rise Together: Achieving Pathway to Canada Target 1 Through the Creation of Indigenous Protected and Conserved Areas in the Spirit and Practice of Reconciliation: The Indigenous Circle of Experts’ Report and Recommendations. Gatineau, QC: Parks Canada. Retrieved from https://www.iccaconsortium.org/wp-content/uploads/2018/03/PA234-ICE_Report_2018_Mar_22_web.pdf

James Dinneen (@jamesNESW) is a writer and audio producer in Brooklyn. Read more of his work at jamesdinneen.wordpress.com.

This article is republished from Mongabay under the Attribution-NoDerivatives 4.0 International (CC BY-ND 4.0) Creative Commons license. View the original article on Mongabay.